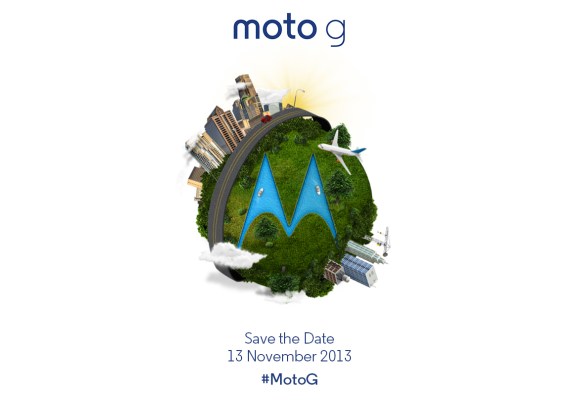 Motorola’s cheaper, slower take on the Moto X is a little over a week from seeing the light of day.

Motorola has opened up a teaser site for the Moto G, which it plans to announce on November 13.

While the company is mum on the details, previous leaks paint the Moto G as a slower but cheaper alternative to the Moto X. The device’s screen size, for instance, has shrunk from 4.7 inches to 4.5 inches, and its Qualcomm chip is now clocked at 1.2GHz instead of 1.7 GHz. Rather than 16GB of onboard storage, the Moto G is likely to start at just 8GB.

On the price side, the Moto G should be pretty cheap on-contract, considering that Motorola recently cut the price of the more mid-range Moto X to $100.

In other words, the Moto G is the Moto X for the rest of you.

Above: What parts of the Moto X will survive the transition to the Moto G? We’ll find out in a week.

The big question, though, is whether the Moto G will come with all the sensors and software that make the Moto X so special. This includes the Moto X’s gesture recognition and always-on voice commands, the latter of which VentureBeat described as a “revelation.”

Another thing: As you can see in the photo above, Motorola already seems to be marketing the Moto G  with a focus on the entire globe, signaling that, unlike the North America-focused Moto X, the Moto G will have a more international bent. The “G,” then, could just stand for “global.”

From a business standpoint, there’s another vital question: Is the Moto G the key to getting Motorola from the red to the black? The company posted an operating loss of $248 million last quarter and a $218 million loss in the quarter before that. The Moto X hasn’t managed to turn that around, but perhaps the Moto G will.

Either way, we’ll know in a week.