Apple released an internal report of government information requests today, saying that countries around the world have asked Apple for private user data on about 2,219 accounts and precisely 36,464 devices between January 1, 2013, and June 30.

Most of the requests came from the U.S. government — about 68 percent of them — and Apple honored the requests about half the time. 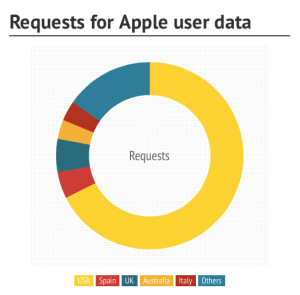 The differences, however, are huge. While Australia asked for Apple user account data 74 times in those six months and Spain 102 times, the U.S. government requested user data between 1,000 and 2,000 times. (The U.S. government does not permit more specific accounting, so I chose the mid-point, 1,500, for my data summaries.)

Russia, by contrast, asked for only one user account, and South Korea for only four.

Apple said this is mostly not about terrorism or piracy issues. In fact, the company says, it has “never received an order under Section 215 of the USA Patriot Act.” Furthermore, Apple would “challenge such an order if served on us.”

The most common account requests involve robberies and other crimes or requests from law enforcement officers searching for missing persons or children, finding a kidnapping victim, or hoping to prevent a suicide. Responding to an account request usually involves providing information about an account holder’s iTunes or iCloud account, such as a name and an address. In very rare cases, we are asked to provide stored photos or email. We consider these requests very carefully and only provide account content in extremely limited circumstances.

The company also disclosed device information requests, which are much more frequent than account requests. The difference is that these requests are typically about stolen devices, Apple says, and they typically happen with an Apple customer asks law enforcement for aid in recovering a lost or stolen phone, tablet, or computer.

Apple received such a request 12,442 times in the six-month period, and in most cases it complied. Those 12,442 requests covered more than three devices per request, totaling 36,464 devices.

Apple’s release of this data is voluntary, and the company says its goal is to protect its clients’ privacy:

Customer privacy is a consideration from the earliest stages of design for all our products and services.

Perhaps most important, our business does not depend on collecting personal data. We have no interest in amassing personal information about our customers. We protect personal conversations by providing end-to-end encryption over iMessage and FaceTime. We do not store location data, Maps searches, or Siri requests in any identifiable form.

And, the company mentioned, it has filed an Amicus brief at the Foreign Intelligence Surveillance Court (FISA Court), asking the U.S. government for permission to provide more transparency. It’s worth noting that the U.S. is the only country that asks Apple for data that requires that its requests be kept confidential, at least to a degree.

Here is the entire document: