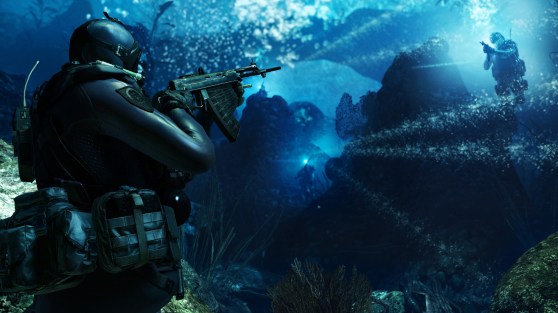 Infinity Ward made a big attempt to change the storyline away from Modern Warfare, whose story ran its course over three games.

Part of that effort included bringing in a fresh writer, Hollywood screenwriter Stephen Gaghan, the Academy Award winner for Traffic and the writer and director of Syriana. He concocted a catastrophic surprise attack that turns the U.S. into a permanent underdog and forces it to rely on the stealthy heroics of a few Special Operations survivors, known as Ghosts.

These Ghosts have to fight without all of the high-tech weaponry that they’ve relied on in the past to crush all opposition. They still have access to some cool weapons that you get to use, but they have to go up against enemies with superior firepower and numbers. That leads you down the path of playing stealth, which is more familiar as the hallmark of the Splinter Cell series and isn’t nearly as fun as pitched firefights. You can’t just call in the airstrike, like you can in Battlefield 4.

The new characters include two brothers, Hesh and Logan, and their father, Elias, a surviving military commander. The tight relationship among the family provides for a lot of drama as they try hard to stay alive and protect each other.

The biggest new addition is a dog, Riley. The German Shepherd can respond to your commands that you issue remotely from a tablet to a wireless earphone in the dog’s ear. So you can control the dog, almost as if it were a drone in combat. But the sad thing about Riley is that he may as well be a drone, given his role in the story.

The best thing I can say about the story is that it is different, and it isn’t the same old thing with the same kinds of villains. It makes me appreciate last year’s story and its villain more. But the plot is as preposterous as most stories in Call of Duty games. Those plots tend to be an excuse for trying out a lot of different weapons in exotic locations.

Each year, Activision’s studios completely revamp multiplayer combat. This is complicated by the fact that Treyarch has developed its own multiplayer structure for its Black Ops game — and Infinity Ward has now created another structure for Ghosts. That’s a good thing that keeps the game fresh. But it also creates a lot of risk for confusing players, making them divide in preferences along Blacks Ops or Ghosts lines.

But with the onset of the new generation of game consoles, Infinity Ward felt like redoing the multiplayer experience to take advantage of some of the things the new machines can do. It has introduced a new Create-A-Soldier system, where players can mold the physical characteristics of a player, as is possible in most role-playing games. There are 20,000 possible character combinations.

For the first time, you can create a female soldier thanks to the new variety of heads, body types, and equipment. But while women have a role to player in multiplayer, the single-player campaign lacks a female character. That’s like one step up and one step back.

You can also create your own weapon kits using a “perk system,” where you get to spend eight perk points on a variety of features such as “faster reloading.” You can use 11 perk points if you choose not to have a secondary weapon. The perks affect your speed, weapon handling, stealth, battle awareness, resistance, equipment, and your elite senses.

You are also allocated a certain number of points to spend on weaponry.That’s a carryover from last year’s “Pick Ten” feature in Black Ops II. The good thing is that you can create your soldier and your loadout to suit your own tastes from the start in multiplayer. You don’t have to wait to level up and earn a bunch of items first. You can also choose your own Killstreaks, or the rewards you get in a match when you reach a certain number of kills.

As you gain XP, you earn tokens to spend on weapons, attachments, and equipment. You can play different roles on the multiplayer battlefield like Assault, Support, and Specialist. The rewards you get vary based on what category you chose. You can earn a “guard dog” that will warn you when there are nearby enemies and take out enemies that get the jump on you.

The game has 30 new weapons, 20 new Killstreaks, and 14 new multiplayer maps. There are a total of seven new multiplayer modes. The new weapons include Marksman Rifles that are more versatile than sniper rifles but have greater stopping power than assault rifles. In the Search & Rescue mode, you get a single life in a round, but your teammates can revive you if they are nearby. Another new mode is Cranked in Team Deathmatch, which starts a 30-second timer when you get a kill. If you get a kill within the next 30 seconds, you can continue. But if you don’t, you explode. Blitz is another mode where you have to attack or defend a certain piece of turf on the battlefield.

The top ranking in multiplayer is known as Prestige. Last year, you could reach Prestige 10 times. But this time, you can only reach it once, but you can have 10 different soldiers, with each one eligible to reach Prestige. This is one of those confusing cases where it’s not clear to me why the Infinity Ward version has to be different from the Treyarch version of Call of Duty.

Lastly, one of the cool new additions to multiplayer is the “dynamic map event.” These vary from earthquakes that throw off your aim to a trap on the Octane map where you can shoot out the pillars for a gas station platform, causing the roof to fall on anyone below.

I like most of the new features in multiplayer. I just don’t think they add up to a winning result in comparison to last year’s game.