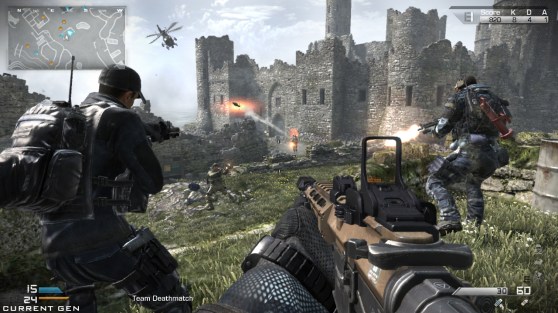 Above: Fight in an old castle in the Stonehaven multiplayer map.

A whole new mode for training and cooperative play

One big addition is the creation of a third mode that blends both single-player and multiplayer. Squads is a nice way to get players on board with multiplayer. In Squads, you can create your own soldiers with the custom configurator from multiplayer play and  give them their own unique loadouts of weaponry. Then you can practice multiplayer sessions with them, but with just you as the lone human player fighting with and against squads of artificial intelligence players, or bots. The bots proved to be surprisingly lifelike in their behavior on the field, but I suspect they were a lot easier to kill than real players. But I enjoyed playing with the bots because they helped refine my feel for the weapons, the new multiplayer maps, and the tactics that worked well.

You can play Squads solo, or cooperatively with up to six players. You can also play competitively. The aim is to make the bots indistinguishable from humans. The bots use tactics like side-strafing, corner-camping, and jump-shooting. Your squad can earn experience points, or XP, when you are offline. As another player can challenge your squad in a squad-vs.-squad match. All of the progress you make in Squads counts toward your multiplayer XP.

I actually think that playing in Squads will help me become a better multiplayer player. And I need some help. Last year, with Black Ops II, my kill-to-death ratio was 0.37, meaning I got 37 kills for every 100 of my own deaths.

Another new mode, Extinction, is like the Zombies mode in the Treyarch games. With Extinction, you have to stay alive with your co-op partners against the legions of bugs from hell.

Above: Cool graphics in Call of Duty: Ghosts.

Cool graphics that will shine on next-generation machines

Call of Duty: Ghosts has some beautiful graphics, like the water-distorted underwater imagery in the Deep Dive level. There are also some cool water effects, high grasses, and waterfalls in the jungle terrain. Character animations are more fluid, giving you the ability to pull off moves such as sliding to a crouched or lying position. Your vision is warped when you look through a waterfall. Water mist rises from jungle streams. Even on the Xbox 360, these animations and scenes look beautiful. And they don’t slow the game down.

There are some new moves linked to the better graphics too. There’s a contextual lean system. When you’re on the attack, you can peer around a corner to see what’s on the other side, rather than exposing yourself. You can do “mantling,” or jumping fluidly over objects without losing momentum.

It’s worth pointing out that, even with the graphics I’ve seen on next-generation machines, that Battlefield 4 looks better and it has an advantage over Ghosts with its destructible environment. 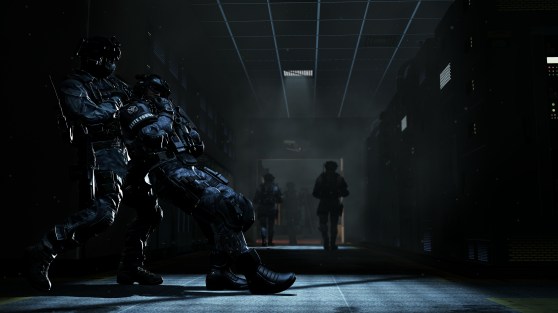 A profile that you can move

Among the remaining new features, one of the most useful is the Call of Duty Profile. You can now take your Call of Duty account, either securely through the Call of Duty Elite social network or by signing up for free inside the game, anywhere you want to go. You can move the account from console to console, current-generation machine to next-generation machine, and to second-screen devices. So when you are ready to shift to the Xbox One or PlayStation 4, the process will be easy. And you will see all of your Ghosts stats and in-game achievements show up.

There’s a new Call of Duty App, created by Activision’s Beachhead Studio. The app keeps you connected to the console experience, as you can use it to edit a squad, change loadouts, and view after-action reports. You can share them on Facebook and Twitter. The app will launch alongside the game on tablet and smartphone devices.

Lastly, the Ghosts has a deep level of support for clans. Players can join, create, and manage a clan all from in-game or from the Call of Duty App. From the game, players can view in-game clan rewards, as well as clan vs. clan playlists, which are all available on both current and next gen. Earlier this summer, I played a version of Clan Wars, a clan-based mode that pits clans against each other in a larger global conflict. That seemed pretty cool.