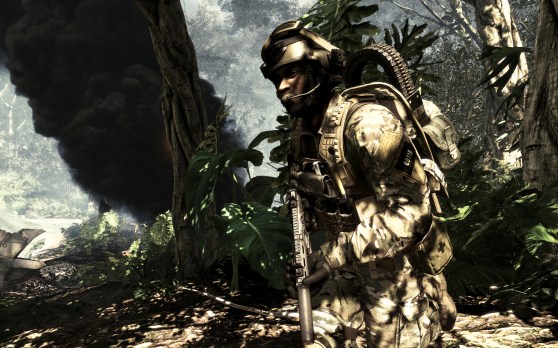 Battle scenes are too familiar

On the face of it, there are some very cool battle scenes in Call of Duty: Ghosts. You fight on a train. You fight in a jungle river. You fight on a beach. But as interesting as these battles sound and as fun as they are to play, they aren’t original. Uncharted: Among Thieves had a spectacular battle upon a moving train, forcing you to aim carefully as the train swayed back and forth. The experience in Ghosts is quite similar. A battle in zero gravity is quite familiar to anyone who has played the Halo and Killzone games. And the jungle, well, let’s just say just about every game gives you the jungle. And Call of Duty’s jungle scene isn’t as good as others.

These scenes are cool set pieces, like explosive scenes from a blockbuster movie. Unfortunately, other games have done them better. Take the tank battle, for instance. The Call of Duty: Ghosts tanks are really fast, flying around corners at 60 miles per hour. It’s not nearly as realistic as the Battlefield experience, and the tank battle happens far too quickly. On top of that, in the one scene where you get to fight it out in armor, there just aren’t that many enemy tanks available to kill. You spend your time shooting antiaircraft guns. Overall, these tanks were just too fast to be real, and that pops the player out of the sense of immersion. Instead of having fun, you’re wondering why your tank is so fast that you can speed right past enemies and survive their attempts to shoot at you from behind. 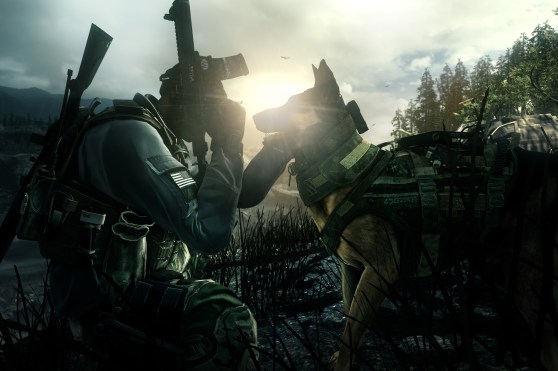 Above: Ghosts has a lot of potential for emotion between Riley the dog and his owner.

The story has the right elements, but it doesn’t come together (spoiler alert)

I found the plot to be fairly implausible. That’s par for the course in Call of Duty games. The enemy of the U.S. is the Federation, a league of South American countries that have gained the upper hand on the U.S. through an act of genocide. But I don’t know where these countries suddenly were able to get together a giant navy or a huge land-based military force that could take on the U.S. Ten years pass from the catastrophe to the game’s action, but it’s still very hard to see how those countries became so powerful as the U.S. became so weak. Again, this part could have been described much better in the short introduction to the game.

If the enemy were the Russians, this scenario could have been much more plausible — especially the parts that have to do with the high-tech nature of the surprise attack. But I suppose the post-Cold War Russia isn’t as good an enemy of the U.S. either. We aren’t fighting Russian communists, Middle East terrorists, or Nazis anymore. This lack of a strong new enemy shows why our love — or at least mine — for these Call of Duty games might be weakening.

In any case, the catastrophe happens so that we can be introduced to the Ghosts, the highly trained badasses who have survived the catastrophe and are now taking the battle to the enemy.

Riley the dog is just as much a character as other major actors in the game. He shows bursts of anger or cowers in fear, and he even whimpers. He adds to the drama in the story. But his role is limited. He’s the centerpiece weapon, so to speak, in a couple of the missions. But the writer doesn’t take full advantage of bringing in the dog as a full character. As such, the dog just fades from memory at a certain point in the game. I wanted to see more Riley in the game, and I didn’t get it. It’s like the writer forgot that we all love dog movies, like Lassie or Old Yeller.

But a worse problem is that the turncoat villain, Rorke, isn’t much of a real villain. You learn that he was once a American Special Operations good guy who became a bad guy, but you don’t really learn that much about how the other villains got him to change sides. He is fierce and somewhat cruel, but he seems no different than other typical Special Operations leaders, taking his aggression out on his troops. Only he is working for the other guys. I didn’t find this to be a believable transition. Rorke is like a running back on a football team who decides to switch sides and play for the others. He’s not the same kind of mad man like Raul Menendez from last year’s Black Ops II. When we learn why he has switched sides, it is narrated to us, not shown to us. So that makes it seem even more implausible.

I don’t know why the seasoned writer would leave out such a pivotal point in the origins of the game’s big villain. So when Rorke does bad things, it seems out of character. We see him as a kind of odd Two-Face character, with a good side and a bad side. It’s even more frustrating that you can’t stop Rorke from doing the bad things when he is determined to do them. 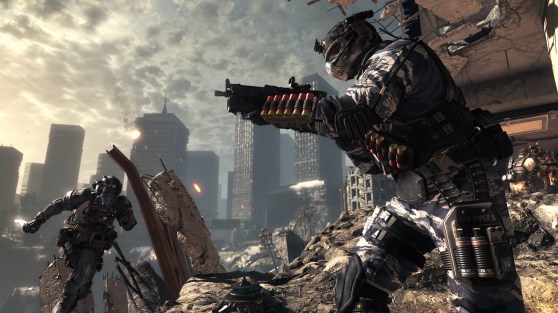 How many times do you have to kill someone?

Ghosts suffers from story characters that really should be dead but aren’t. They get shot in the chest and miraculously recover. You could say that maybe they are wearing body armor. But it happens far too often. So much so that when someone actually dies from wounds, you find it hard to believe. I can’t say more about this problem without spoiling the story. But it ranks high on the list of annoyances for me.

The fact that the writers have to keep the villains around for sequels and later scenes just tells me that they didn’t create enough villains for the game. I really want more. And when I shoot them, I’d prefer they stay dead. It just hurts the suspension of disbelief even more so. And that makes you start thinking that the story for this game isn’t all that it should be. 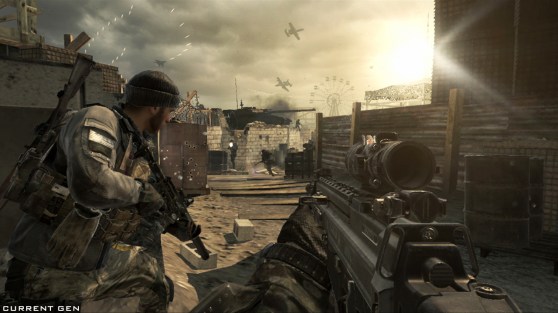 Above: Call of Duty: Ghosts Beach Day battle, where you defend Santa Monica from naval assault.

Some features are missing

It puzzles me that some of the innovations created by Treyarch in Black Ops II are missing from Call of Duty: Ghosts. Namely, the in-game livestreaming from Black Ops II is absent from Ghosts. So is the Theater mode, which enabled you to easily record and share your sessions with friends. But both the PS4 and Xbox One will have built-in livestreaming from Twitch. You’ll just have to use those tools in order to stream your sessions. That’s not a huge loss, but it doesn’t help current-generation owners, and it means that the livestreaming and sharing tools won’t be tailored to Call of Duty.

Ghosts doesn’t have a Zombies or Strike Force mode. I don’t really miss Strike Force, as it was very difficult to play. But Zombies is getting to be so fun that it really just ought to be included in Call of Duty from the outset.

Some of the features seem like they’re missing. But they just have different names. Last year, Treyarch introduced a capture the flag variant dubbed Hardpoint. This year, it’s still there, but Infinity Ward is calling it Blitz.

These guys really have to start talking to each other, just for the sake of continuity. Because their gamers are the same. And we’re getting confused.