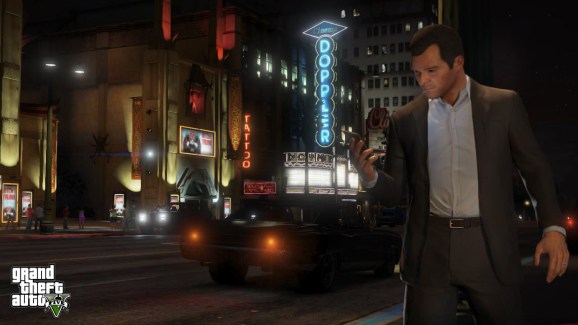 GTA V's Michael outside of one the game's theaters.

Have you finished Rockstar Games’ multiplatform sandbox adventure Grand Theft Auto V? If the answer is yes (or no), you’ll still find much to do in the beautiful, sun-kissed city of Los Santos. Do you know that you can kick back and watch movies in its numerous cinemas? That’s right. Even better, I dug up some reviews from my San Andreas film-critic alter ego, Ed Martino, to help you pick the right flick.

Check out these highly informative — and extremely well-written — analyses of the most popular films you can catch with your buddies Franklin, Michael, and Trevor.

Hello, movie buffs, reckless drivers, and mass murderers. Ed Martino here, telling you which pictures are worth your honest, and not so honest, dollars. Remember, no stars means a film doesn’t deserve any interest, while five stars means that even the Pentagon needs to know about this box-office bombshell.

This movie’s name is hard to spell, and its plot is even harder to understand. I had no idea what was going on. All I remember is watching a guy with impressive facial hair climbing a ladder. And a horse appeared at some point as well. Mimes, too. They just stood there, though, not doing anything. Which I think is a good thing. Maybe? People spoke to each other in French and Spanish, spewing nonsense while things spun around.

I think the story centered on the mustachioed man and his dead wife. Or something else. Who knows? What I do know is that this made me want to get some Cluckin’ Bell afterward.

The Loneliest Robot In Great Britain

Fred’s Pictures brings us this sobering tale of a little robot named Martin who can’t seem to find any happiness in his drab and dreary world.

While the animation was nice and all, I’m more of a computer-generated cartoon kind of guy. You know, those colorful things you watch when you want to escape the horrible, Weazel News reality of our mundane and pointless lives? I should have moved to Liberty City to make something out of myself instead of writing about this drivel. But no … I thought I had a future with Sapphire — Sapphire! Serves me right for finding my “dream girl” at the Vanilla freaking Unicorn.

Get it together, man. … All good things come from Kraff. Happiness is mine. Kifflom!

Deep breath. OK. Where was I? Ah, yes. The Loneliest Robot In Great Britain is a sad fable, but if you’re into that kind of stuff, go for it. I’m not stopping you.

From director Anton Beaudelair and newcomer Michael De Santa comes Meltdown, a fast-talking thriller that’s all about saving capitalism from greed and excess. Beaudelair shot this blockbuster on a green screen, which, if you ask me, is the wave of the future. You’ll watch BAWSAQ billionaires stab each other in the back while cars and the stock market crash into balls of entertaining financial fire. And you’ll even see a talking monkey. Yep, a talking, driving, and dancing monkey.

What’ll Vinewood think of next?

I sat at the edge of my seat for the entire experience, and that’s not because the balding guy with a “cut here” neck tattoo behind me was giving me the creeps. Not at all.

Rating: 4 stars out of 5. I need to get my hands on some of that Richards Majestic stock.

And that’s it from me folks. As I always say, meet me at the matinée — unless I have a restraining order against you.