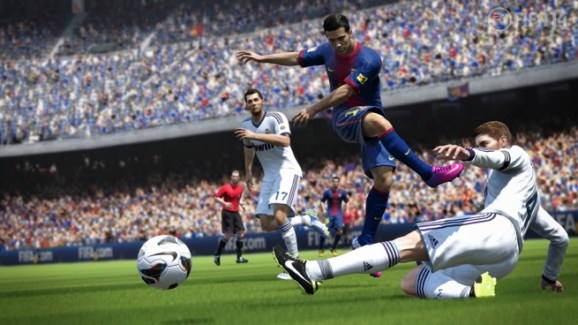 Players put in 18 billion minutes into FIFA 14 from October to December. That's a lot of (soccer) balls.

Each year, virtual-soccer giants FIFA and Pro Evolution Soccer (PES) go head-to-head on the pixelated pitch for the honor of being the fittest footballing simulation. Both started their seasons only a few weeks ago on PlayStation 3 (played here) and Xbox 360, so fans are still getting to know the latest versions of the franchises they support with so much fervor.

We’re here to cover the big showdown and compare the two sides, so we can determine which soccer sim deserves to lift the cup.

Like a prized new signing, the Fox Engine brings a lot of flash to PES 2014’s on-field product. The series has never looked better. Superstars like Barcelona’s Neymar have painstakingly detailed models while stadiums boast a new level of polish — complete with colorful mosaics in the stands. Animations are better, too, giving PES’s matches a more realistic appearance than before. The new visuals aren’t perfect, however. Whenever the camera zooms in to show a player, referee, goal celebration, what have you … the framerate chugs badly. Less-notable athletes look strange, with beady eyes and facial constructions straight out of a Beverly Hills plastic-surgery center.

Above: The Fox Engine brings a new level of detail to Pro Evolution Soccer’s character models.

FIFA 14 didn’t really do much with its already solid aesthetic, taking a conservative approach. The framerate is a lot more consistent than PES, as are the visuals overall. While the most popular footballers look slightly more lifelike through the Fox Engine’s shiny new lens, FIFA re-creates its entire roster of players more accurately. Regardless, FIFA needs to take note of PES’s glitzy makeover because Konami’s game is now just as pretty.

Result: PES 2014 takes a cracking shot from outside the box. The ball hits the post, almost putting the Japanese side ahead.

Years ago, Pro Evo was undoubtedly the champion when it came to gameplay. Instead of pushing forward, the PES team decided to hold back and sit on its lead. As a result, FIFA implemented more advancements and took charge.

PES made strides in the last couple of years, however, and 2014 is the series’ best-playing entry since its dominant days. In fact, many footie diehards will appreciate the vast amount of options that they can tinker with to create goals. You can pull up a command list that could have come straight out of a fighting game, showing you a plethora of nutmegs and feints to pull off. And I enjoyed the one-two interactions with my A.I. teammates that ended in plenty of scoring chances. PES 2014 can get pretty hardcore, which will attract some and repel others, so keep that in mind. A few of the more advanced skills are pretty challenging but incredibly effective — and satisfying.

Player movement does take some getting used to. The virtual athletes have a lot of weight thanks to Fox Engine’s physics, adding an intriguing new dynamic, but in some cases, I felt like I was skating on ice while directing my team. Shooting is even more awkward. It’s downright laggy and floaty, really. The defense thwarted a lot of my runs because my player would take too long to shoot after I pressed the corresponding button. A lot of this comes from the aforementioned physics, but it just feels weird. And many of my shots ended up rolling on the grass when I wanted them to go high.

Above: The Fox Engine brings new physics and player movement to PES 2014.

Speaking of shooting, FIFA 14 is all about its new Pure Shot feature. While I didn’t sense a huge difference in my players’ goal-scoring prowess, I felt EA Sports’ effort showcased a smoother game of football. Everything is snappier, which doesn’t necessarily mean the action is more arcade like. The difficulty is as high as ever, and I found myself approaching the opposing team’s end a lot less frequently this time around. So, setting up plays is as important as ever.

Again, EA chose not to do too much to a winning formula. And I can’t really blame them here.

Result: A FIFA forward manages to get a shot on target. The ball deflects off a PES defender and into the net: 1-0 to the North Americans.

FIFA 14 and PES 2014 include the modes you would expect from each franchise. On the FIFA side, you’ll enjoy Be a Pro (player and manager) career mode and the ever-evolving Ultimate Team, in which you build a lineup through a collectible-card system that provides athletes, stat boosts, and other important foundation elements. The game also brings back its EA Football Club that gives you experience points for your favorite squad. And another nice returning feature takes teams’ real-life form into account, adjusting roster stats to reflect their winning, or losing, ways. 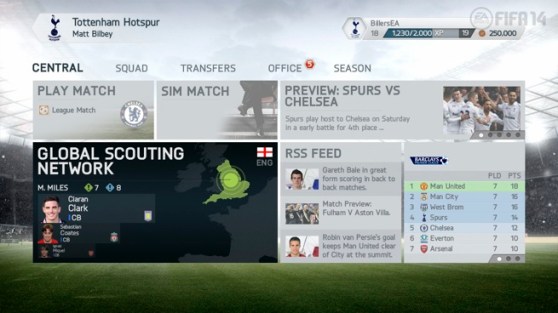 Above: You can become a soccer superstar in FIFA 14’s career mode.

PES offers the aging, yet still addictive, Master League, along with its own take on a create-a-player career mode. I liked putting together a competitive group in Master League, especially finding affordable gems on the transfer market, but Konami needs to freshen up the experience. The career mode is significantly worse than Be a Pro, giving you fewer options and more frustration. I didn’t even get to play on my team for a large portion of the matches during my first season. Basically, I ended up going from menu to menu, simulating weeks and losing my patience.

Result: The EA Sports lads go up 2-0 after an effective midfield buildup, resulting in a clever through ball to a wide-open attacker, who effectively placed the ball in the corner of the net.