Dr. Darius Maggi, a retired obstetrician, is a regular visitor to Sierra Leone, a country where 1 in 14 women die of complications from pregnancy. He’s using his retirement money to fund operations for over 100 women each year, who suffer from a life-threatening complication known as obstetric fistula.

Entrepreneur Leila Janah crossed paths with Maggi during a recent trip to the region. This inspired Janah to create Samahope, a website for people to donate directly to Maggi, and other surgeons like him, so they can purchase equipment and supplies for these critical patients. 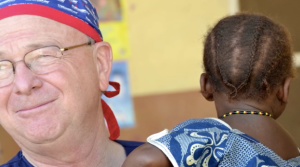 At that time, Janah was working around the clock, running and raising funds for her other nonprofit, Samasource. Samasource connects people in the poorest regions with work opportunities, and it focuses on women and youth. Samasource is well established in Silicon Valley, as it helps tech companies like Eventbrite and LinkedIn outsource data entry work.

With Samasource continuing to flourish, Janah will focus more time on Samahope. She exclusively revealed to VentureBeat that she will assume the role of chief executive of the entire Sama Group brand.

Janah will run Samahope alongside Shivani Garg Patel, a former consultant and social entrepreneur who came on board last year. The board of directors has already begun the search for a managing director at Samasource.

The board also announced plans to expand the “Sama” brand to incorporate another nonprofit, “SamaUSA” which is providing work opportunities for people living below the poverty line in the United States.

A new model for Samahope

In the midst of these executive changes, Janah has rebranded the Samahope website, and introduced a new donations model.

On Samahope, you can provide as little as $9 per month to doctors who are treating patients with a variety of common conditions, including birth defects and difficulties, traumas, blindness, and burns.

In the past, the website would be prompt people to donate directly those in need, which borrows from the popular Kiva model. As of this month, Samahope will instead feature the intimate stories of physicians in developing nations.

“Donating to doctors is a more respectful, more positive experience,” said Janah. Her team realized that most patients do not feel comfortable sharing intimate details of their medical conditions online, even if it tugs at a potential donors’ heart strings.

“For someone who has just endured a four day labor, the last thing you want to do is describe that experience on a website,” she said. 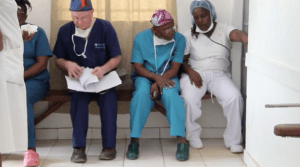 Above: Maggi first visited Sierra Leone in 2002. In his career, he has delivered almost 15,000 babies.

Janah has some ambitious plans for Samahope. She plans to make use the health data in aggregate, so other nonprofits will better understand how medical resources should be distributed. In the most rural parts of the world, charitable organizations often need to make an educated guess how many drugs, trauma kits, and other types of equipment are required.

Sama raises money through a combination of crowdfunding, partnerships, and fundraising events. In October 2012, Samahope raised its first $50,000 in an Indiegogo campaign to fund the development of a website.

Last week, the company hosted a gala in San Francisco, which was attended by prominent tech entrepreneurs, investors, and the press. I attended the event, alongside the thirtysomething chief executives of startups like Counsyl and Peek, as well as the founder of Facebook gifts, Lee Linden.

In the first hours of the dinner, the Sama Group raised over $700,000 in funding through a combination of ticket sales and pledges. Janah took to the stage to deliver the keynote, where she urged the audience to run their businesses in a socially responsible way.

“Our success is about getting the crowd to embrace us and our model,” said Janah. “It’s not just about raising money — it’s about educating people about these conditions, and the fact that 2 billion people don’t have access to acute care.”

Here’s a video, released last year, in which Janah describes the Samahope mission.