Fifteen new jobs are posted to Twitter every single minute, according to a new study by social recruiting company Gozaik, and that that number has grown by 32 percent in just the last six months. 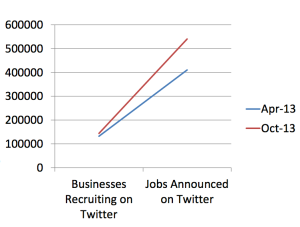 And it’s not just tech.

The biggest category of jobs that companies are recruiting on Twitter for is sales, at almost 25 percent, just edging out IT and other technology jobs. The other big category, surprisingly, is medical/dental, which accounts for almost 15 percent of all jobs posted on Twitter, Gozaik says, with jobs like anesthesiologist, orthodontist, and medical director.

“They are recruiting surgeons on Twitter and top-notch oncologists — many roles you don’t even see on LinkedIn,” he told me. “There are a lot of professionals on Twitter who blog and tweet about the medical field, so therefore you get lots of announcements coming out in the hopes that these individuals will see them.” 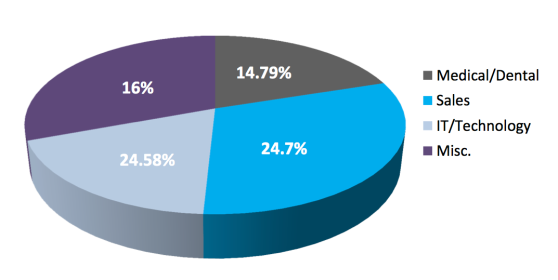 “We’re building a digital fingerprint on every Twitter user,” he says. “So employers can specify exactly what kind of person they’re looking for, and we reach out to those people in an entirely automated way.”

That kind of growth rate — and these kind of enterprise targeting tools — will help Twitter become a dominant job-search and recruiting platform, Budzienski believes. So much so that it could even challenge the grand old man of the careers space: LinkedIn.

“I think, recruiting-wise, there’s a new revolution that is accelerating: real-time hiring,” he says. “You can’t effectively get that on LinkedIn. LinkedIn is effective for someone who has the clout to have a very astute profile with lots of information, but’s also very difficult … and you get sold to a lot.”

Gozaik is launching out of private beta this week.

According to the company, here are the top 25 cities for job postings on Twitter: