Thomas Andersson likes Battlefield 4 better than Call of Duty: Ghosts. Then again, you’d expect that, as he’s the lead multiplayer designer for Battlefield 4, the new first-person shooter that debuted last week for current-generation consoles and PC and will be available on the PlayStation 4 and Xbox One on their respective launch days. 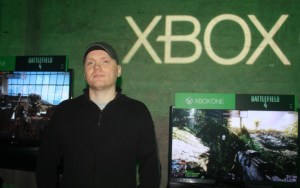 So far, Battlefield 4 has come in with solid ratings, with an average score of 86 out of 100 on review aggregator Metacritic. Initial reviews peg Call of Duty: Ghosts at 74 out of 100. That’s a big turnabout, and it may have a lot to do with multiplayer. With Battlefield 4, as many as 64 players can fight in a single match, and a commander can direct the strategy for the players on either side. Call of Duty hasn’t matched that kind of massive online melee, but it has proven to be more popular in the past.

Who’s going to win this modern combat brawl? We caught up with Andersson at a recent Microsoft Xbox One event. Here’s an edited transcript of our interview.

GamesBeat: Tell me what you guys were trying to achieve with this latest Battlefield.

Thomass Andersson: For me, this is kind of like the greatest hits of modern warfare Battlefield. We’ve been trying to bring together all the components we felt were missing. Commander is back from Battlefield 2, for example.

GamesBeat: That’s where you’re able to see everything from above and direct the battle?

Andersson: That’s right. It’s a more strategic view of everything. The interplay between soldiers on the ground and the commander is something I’m excited to see.

GamesBeat: What is the commander able to do?

Andersson: He can support his team by supplying assets for them. He can drop in supply crates that allow them to change kits. He can promote squads — I don’t know if you know about what we call the “bro bar,” which links to field upgrades. It gives them a little bit of experience in that so that they can get more boosts. He can drop in vehicles, light transport vehicles. It’s context-sensitive, so if he drops it on the water it’s a jet ski. If he drops it on land it’s two-seater quad bike.

He also has control over the resources that his team has managed to conquer on the field. It could be a Tomahawk cruise missile. It could be a gunship that circles the area and allows his soldiers to take up gun positions there.

Above: A collapsing building in Battlefield 4.

GamesBeat: So the commander role is fun in itself, then.

Andersson: Yeah. Even without those things, just directing people around to different points is really fun — especially if you have 64 players. It’s a lot to keep track of, trying to scan areas for them, spotting targets, faking out the other commander with things like EMPs. With those you can disrupt his communications with his team. I think it’s a lot of fun.

GamesBeat: What else comes together in a bigger way like that?

Andersson: Destruction is another thing we’ve had in the past. That was introduced in Battlefield: Bad Company. For us, we wanted to take it even further. That’s where the Levolution concept comes from. Taking things that you normally only see in single-player games, those “wow” moments, like the skyscraper coming down or the dam breaking — but it’s more than that. It’s dynamically changing the map. In Flood Zone, for example, we flood the entire city. It mixes up gameplay.

GamesBeat: So you can make these things happen? You’re in charge of them?

Andersson: Yeah, the players are in charge of it. They might be trying to keep them from happening as well. In the beta, we saw a lot of people who didn’t want the skyscraper to fall down, because they wanted the strategic advantage it provided. They wanted to be able to parachute from the top of the skyscraper. Something we’ve had to balance over the course of the beta is the “health” the pillars of the building have, so it’s not as easy to destroy them. In the beta it was pretty easy to take them down.

Above: Characters from Battlefield 4.

GamesBeat: If a player’s choosing between Call of Duty: Ghosts and Battlefield 4, what do you think is the selling point in that context?

Andersson: For us, we provide the same type of experience that Call of Duty has — in the game mode we’re showcasing today, for example, Domination, and in team deathmatch and those kinds of smaller game modes. But Battlefield also has the all-out vehicle-focused warfare gameplay in Obliteration, Conquest, and Rush. We just provide more. We’re a bigger game in every sense.

GamesBeat: And you have the 64 players.

Andersson: 64 players and 60 frames per second on the next-gen consoles.

GamesBeat: If somebody is really discerning about graphics, what are they going to notice about the difference between the generations?

Andersson: Comparing 360 and PS3 to Xbox One and PS4, the overall fidelity of the graphics, it’s very noticeable. The set-dressing we have, those finer details, better textures, there’s a lot more of that on the next-gen consoles, things you’d normally see on an ultrahigh-end PC.

GamesBeat: Does it have to do with how much movement actually happens on the screen as well, in terms of the amount of action you can produce on screen?

Andersson: When it comes to particles, for example, yes, it does, and also animation quality. Having 64 players with vehicles, the kind of thing you normally only have on the PC, seeing that on the consoles makes me want to have a next-gen console, at least. I’m really looking forward to it.

Check out our video interview with Andersson below.