William Provancher wants you to get a grip. His startup, Tactical Haptics, is launching a Kickstarter campaign to fund small-scale production of a new kind of touch feedback game controller, dubbed Reactive Grip. 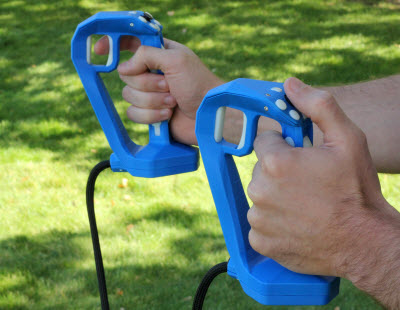 Above: Reactive Grip gives you feedback in both hands.

The Reactive Grip gives you much sharper sensations than the aging “rumble” game controllers with haptics, or touch feedback, from companies such as Immersion. I was able to demo the device, and the grip really does give you quite a bit of force feedback. It shows you how it feels to stab at a body with a sword, shoot a gun, fire a slingshot, or ride a dune buggy. It’s one of those experimental technologies that you have to feel to understand.

Provancher launched the Kickstarter this morning in hopes of raising at least $175,000. With that money, he can create 1,000 test units to ship to Kickstarter donors. It is all in the name of keeping gamers from getting bored with the same old game controllers. Haptics can add a new level of realism and physical connection to games, Provancher said.

The technology has its roots in research that Provancher performed over the past six years as a professor of electro-mechanical design and haptics at the University of Utah in Salt Lake City. In a graduate school haptics lab, Provancher and his students created a variety of haptic feedback devices. They believe that the Reactive Grip controller works best and could fit nicely with technologies such as the Oculus Rift virtual reality goggles, which have been a big hit with game developers.

“We want to get these things in the hands of consumers so they can drive the demand for it,” Provancher said. “It’s something you have to experience. As far as applications in gaming go, we are casting a wide net.”

Provancher hopes that the Reactive Grip could be integrated into game franchises such as Call of Duty, Battlefield, Elder Scrolls, or Left4Dead. That won’t be easy, as game developers usually want a big audience for a device before they will tailor a game for it. 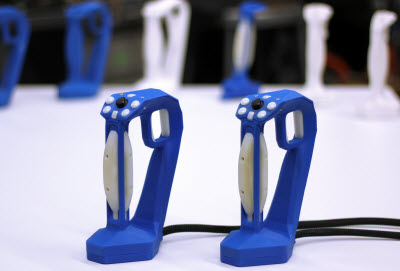 As I used the controllers, I could feel the impact of a sword hitting a shield and the kick of a gun. Provancher thinks the grips will also work with virtual sculpting, modeling, or remote battle bot applications.

The grip works by mimicking the friction and shear forces that we feel in the real world when holding an object or touching a surface. The device measures the movements of a player’s hand, and an actuator, or small motor, causes small sliding plates in the grip of the controller to recreate the friction and shear forces that you would expect to encounter when holding an actual object, such as a sword, slingshot, or fishing rod. The controller reacts to a player’s actions and motions in the virtual world. You can do things like grab objects, deform them, and feel the reactions.

Provancher made his first working Reactive Grip controller prototype earlier this year and demoed it at the Game Developers Conference as well as the NeuroGaming conference. If the device succeeds in games, Provancher may try to address markets such as virtual surgery and medical applications.

Provancher started Tactical Haptics this year to get serious about commercializing a technology that has been his passion for years. He founded the Haptics and Embedded Mechatronics Lab at the University of Utah and received some government grant money from the National Science Foundation Innovation Corps program.

He licensed the technology from the University of Utah and has set up his company in both Fremont, Calif., and Salt Lake City. The technology also uses the STEM motion-sensing technology from Sixense, and the current demos have been created with the Unity 3D game engine. The device will debut as a peripheral for a PC.

“Gaming and virtual reality is our first stop, and from there we can pivot into healthcare,” Provancher said.