Verizon’s new Ellipsis 7 tablet is crummy and overpriced — but that’s not why it bothers me.

It bothers me because it’s yet another example of Verizon’s constant desire to control not only the data flowing through its pipes but the devices using that data as well.

Under normal circumstances, perhaps that’s not inherently a bad thing. But let’s not forget that while Verizon has announced its own 7-inch tablet, the company is still dragging its feet on getting the newest Nexus 7 certified for use on its LTE network

The story here is worth recounting.

When the LTE-capable Nexus 7 was released in September, early owners found that they weren’t able to use the device on Verizon’s LTE network. One of these owners was well-known journalist and professor Jeff Jarvis, who tried to connect his new Nexus 7 to his Verizon account but, alas, could not. Verizon’s reasoning? “Not all LTE tablets are created equal. It’s not part of our line up & can’t be activated,” the company Tweeted in response to Jarvis’s complaints. 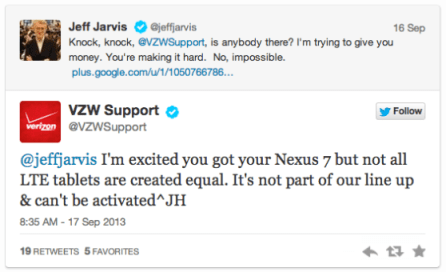 Verizon eventually backtracked on that line, noting that it had to ensure the Nexus 7 worked on its LTE network — despite the fact the FCC had already done so. The process, which the company said takes up to six weeks, started in mid-August. That was at least 10 weeks ago.

Fast forward to today, and there’s still no word on when the Nexus 7 will get that clearance. But we do have more noise from Jeff Jarvis, who has taken his fight with Verizon all the way to the FCC itself.

In case you’re wondering, the Nexus 7 works just fine on the LTE networks of AT&T and T-Mobile. Surprise!

We’ve asked Verizon for an update on the situation, but the company has yet to respond. 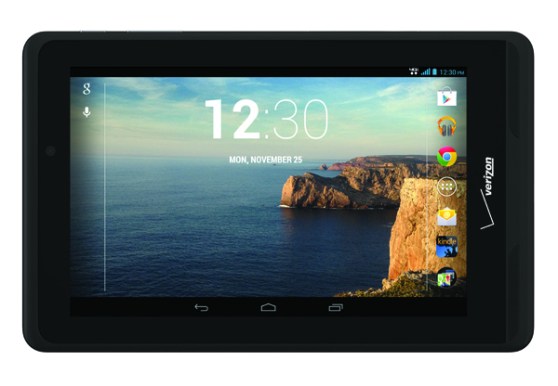 Above: Not all LTE tablets are created equal, and Verizon doesn’t treat them that way, either.

The reality is that the Nexus 7 may never get certified for Verizon’s network — which makes it convenient that Verizon is filling its 7-inch tablet void this fall with one of its own. (The company also sells Samsung’s Galaxy Tab 2 7.0, which was released last April.)

While it’s hard to prove that Verizon has kept the Nexus 7 in certification limbo just so it can sell its own tablet uncontested, that’s exactly what it looks like from the outside.

And it’s not unprecedented either. Google’s new Nexus 5, for example, works on every major US network except Verizon’s. The company has also blocked phones on its network from running Google Wallet, which competes directly with ISIS, its own mobile payment service.

All of this is probably a nightmare to anyone even remotely concerned about what happens with the operators of the pipes want to control every device running on them. In Verizon’s ideal world, the only devices subscribers could use on its network are the ones that it itself makes. And there’s nothing neutral about a network that looks like that.