Microsoft has been touting the “Drivatar” of Forza Motorsport 5 ever since it started talking about the Xbox One game console. The Drivatar uses cloud processing, or extra cycles available in Microsoft’s web-connected data centers, or cloud, to calculate artificial intelligence for the cars that you race against in Forza. 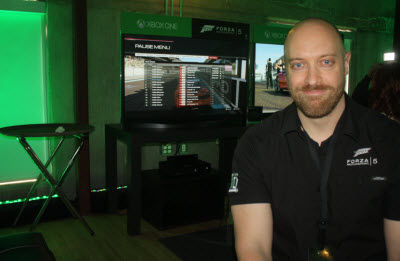 Dan Greenawalt, the creative director at Microsoft’s Turn 10 Studios (the developer of Forza), told us that the only way to really understand the Drivatar is to play it. Rival cars slow down in front of you, cut you off as you make a move, or do other dirty tricks that usually only humans do. But they’re A.I.-driven cars, with the processing offloaded from the console to the 300,000 servers in Microsoft’s cloud.

Forza 5 debuts as a launch title for the Xbox One, which hits retail Nov. 22.

We caught up with Greenawalt at a recent Xbox One preview event. Here’s an edited transcript of our interview.

GamesBeat: I remember you guys talked a lot about the Drivatar at the Electronic Entertainment Expo. How has it come along?

Dan Greenawalt: Honestly, I’ve struggled since E3 with explaining it to people. It’s a very different type of technology than we’ve seen in games before. The exciting thing about this event is that people are just getting to play it. When you play it, the difference is very obvious.

The system is cloud-based. It’s learning. It’s always aggregating and generalizing and re-creating an A.I. that can act on your behalf. Whenever you log in, you’re going to get some money from it. The biggest thing, though, is that when you’re actually playing the game — there are 16 cars on track. They’re all Drivatars. They’re weaving in-and-out. They’re doing complex passing behavior. It looks like no other racing game, except a game where you’re racing multiplayer.

It looks like multiplayer without any jerks in it. Nobody’s trying to PIT-maneuver you. They will play rough at times, though. They’ll brake-check you. They do incredibly human behavior. It’s come together really well. What we’ve found with our risk-reward system, you’re encouraged to turn up the difficulty. With 16 Drivatars, the racing has never been better.

GamesBeat: How long does it take for the Drivatars to adapt to your own driving?

Greenawalt: The opponents don’t adapt to you. You choose what profile of opponent you want, what skill level. There are about seven different levels. Then it’ll pull down from the server to create this group of Drivatars. The Drivatar that you train races against other people. It takes about three races to get a basic Drivatar in place, something rudimentary. Every time you race, it becomes more accurate to more different scenarios with different tracks or different cars. As you get more skilled as a player, your Drivatar gets more skilled in those scenarios, too.

GamesBeat: So you’re providing other people with a better experience when they have their own races. You get a human-like A.I. opponent.

Greenawalt: Like I say, it really doesn’t look like the kind of racing games you’ve seen before. You see them going three abreast. You see them trying to fake each other out. They’ll set you up for complex passes. That’s the sort of thing that only happens in multiplayer with other racing games. Some games have had scripted crashes and other events. We have crashes, but they’re not scripted. The A.I. has learned that, say, sometimes a particular guy can brake too late in a particular corner and go wide. It’ll replicate that sort of behavior. 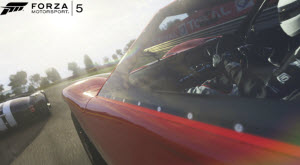 Above: A Forza Motorsport 5 window closeup.

GamesBeat: Where does the cloud come in most? Where do you need this external processing power?

Greenawalt: Honestly, to do this much adapting—basically, every time you race, we upload telemetry. It’s where the other cars were and what your car did when you made a bunch of decisions. We’re also recording the line you took and all this other information about the race. That telemetry is not a lot of data, once it’s baked down into a small file. It’s uploaded to our servers for every single person and every single race.

The server is then thinking about all of that data as it’s coming in. It’s crunching all these numbers and learning new behaviors on different tracks and in different scenarios that the whole system can then learn. That’s not your Drivatar yet, though. Then it looks at that massive system and decides what aspects of that system represents what your Drivatar should do. It pushes that down to other people. Every time you log in, you get other people’s Drivatars, which are constantly updating, downloaded into your system. If you’re offline, we don’t update it. We have the last data that was cached, and the next time you log in, we’re going to cache more updated data.

GamesBeat: Did you guys hit what you wanted to do here, or do you think you’ll have more to do with a second version?

Greenawalt: We always have more to do, honestly. This is the fifth version of Forza Motorsport. We’ve added innovation with every version. Forza had the livery editor and the green line. Forza 2 had the auction house. We did more things with the multiplayer. In Forza 3 we added autosteer and autobrake. We had the storefront. Forza 4 added all the Kinect features and Autovista mode, where you could open up the cars. Now we have cloud-based Drivatars. We have 1080p and 60 frames per second. We have the all-new graphics engine. There’s always new stuff.

I think about the franchise more in five- to 10-year terms, as far as where I’d like us to go. We’re always leapfrogging with our teams to work on technology years in advance. 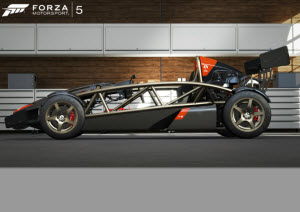 Above: Side view of a Forza Motorsport 5 car.

GamesBeat: For something like Drivatar 2.0, do you know what you have in mind for that?

Greenawalt: First we have to see what it’s going to continue learning, once there’s a million people training it. Right now we have about 400 of us, including playtesters. It’s going to learn a whole bunch of new stuff out there in the wild. It’s going to be automatically adding new features to itself.

Ultimately, though, we have the control. We have griefers on our team, and they’re always trying to train it to do things. The system has failsafes, so it simply won’t learn how to do things like radically smashing into people or driving backwards on the track. But that doesn’t mean it won’t learn complex driving behavior, like setting up double passes or brake checking.

GamesBeat: What else do you think you’ve achieved with this version?

Greenawalt: Racing games have been at console launches for a long time. But this game has more than 200 cars. We have 40-plus ribbons. The new material system is the hallmark of this generation, going into complex materials and how light interacts with them. We’re doing things in physics that weren’t possible in the last generation. This isn’t just a launch racing game. This is a full Forza Motorsport at launch. The team and I have never attempted anything so difficult. It was a really energizing time in our careers, putting this forward.

GamesBeat: How long did it take you to get this out?

Greenawalt: We started more than three years ago. Basically, before Forza 4 launched, Xbox One was being talked about, and we started working on a bespoke engine for Forza Motorsport 5. At the same time, we were looking at Forza Horizon. So we’ve been doing a lot of Forza simultaneously – 4, Horizon, and 5. We’ve been carving off parts of the team to work on technology for the future.