With the next generation of consoles due in a little more than a week with the PlayStation 4’s debut, the launch lineup is firming up. A little over a week ago, 2K Sports held a press event outlining their plans for next-gen basketball, starting with NBA 2K14. Last week, EA revealed their NBA experience with NBA Live 14. Now that we’ve seen them, how do the new generation of sports titles stack up thus far?

Let’s take a look at both soon to be released basketball games and break down their advantages and content packages. We’ll see who has the edge over which game aspect and find out if there is enough data to determine a clear king of next-gen hoops.

EA brings Sports Hoopsnet, where players will find the home for all things involving online play. The head-to-head feature not only has seasons but even an tournament mode and ladder rankings. It’s reminiscent of Battle.net, Blizzard’s all-in-one online hub for games like StarCraft II, one of gaming’s e-sports stars. And NBA Live 14 appears to be going for similar aspirations.

And like its EA Sports brethren, Madden NFL, NBA Live 14 now boasts its own Ultimate Team mode, in which players unlock virtual card packs to form their ideal hoop squad. That means, yes, you can have a future Dream Team of your own, with Kobe Bryant, LeBron James, Tony Parker, Dirk Nowitzki, and Ray Allen as your starting five. You can also play against former and current NBA teams and other players’ teams, too. NBA 2K14 has a similar offering through its MyTeam mode, with its own tournament mode and head-to-head action, but 2K has yet to fully detail that content. Based on what we do know, both modes seem fairly similar, but without 2K’s full disclosure, Live 14 gets the advantage here. 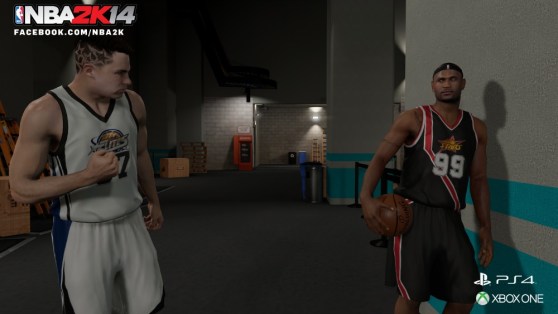 Above: 2K14’s MyCareer mode offers depth in choice and consequence.

Comparably, Live 14’s answer to 2K14’s MyCareer mode, called Rising Star, gives players an opportunity to create their own NBA legacy. Similar to MyCareer, Rising Star also begins on the road to the NBA Draft. Failing to reach the draft is a possibility in 2K14’s career mode, but it’s impossible to fail in Rising Star, EA tells us. However, you can drop from the first to the second round, which will affect your playing time and starting role eligibility.

Or you can take a more linear route, as Rising Star helps you manage a career spanning 25 years. MyCareer’s nonlinear course offers more narrative and choice in this regard and has over 40 hours of play in the first season alone, but it’s unclear how many seasons the game offers. EA has the depth as far as longevity goes, with 2K potentially offering an equally dense experience albeit within a limited number of seasons, but again, we can’t be sure what that limit is. It may come down to what’s important to you as a player: Do you enjoy a longer experience or more choices?

Who makes a better GM?

NBA Live 14 does have a GM and Dynasty mode, where you manage an organization, including player contracts, trades, and ticket prices. It’s all very similar to NBA 2K14’s MyGM mode. Both features reward you for good management, and bad administrators likely get fired. Either way, both look to be on equal footing in this arena.