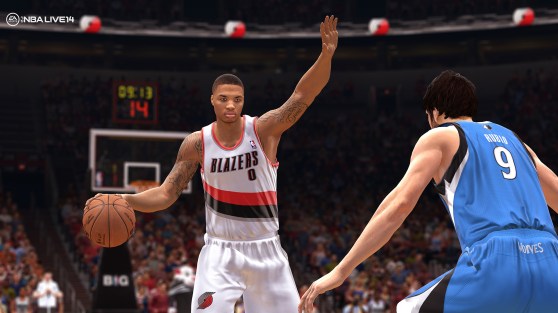 Above: Live 14’s dribbling is a hybrid between real world physics and arcade rules.

NBA Live 14 takes a more “thoughtful” approach, as EA Sports executive producer Sean O’Brien describes it. Movement is based on real-world physics. So if the player onscreen is standing still or turned away from the basket, you can’t just make a beeline in full sprint to the rim, like in previous versions. You have to consider the player’s position and actually build up the momentum necessary for offensive aggression.

This new level of play really does require thought as you attack or defend the basket. Same can be said of dribbling, which works under the same principle and is much more technical. When it comes to ball-handling, every player now has six signature dribbling moves, regardless of how their real-life counterpart plays. And the general controls contain three tiers of dribbling, which progress in finesse and execution. NBA Live 14 may adhere to real-world physics in terms of mobility, but as far as skills go, the game definitely sticks to an arcade style.

2K only permitted the press to play 2K14 for 2 minutes, so we’re unsure how deep the gameplay goes, but we do know that it’s based on authenticity. So a sharp-shooting center like Nowitzki won’t have the same shot-blocking skills as the Warriors’ Andrew Bogut, a more traditional big. This category may also come down to player preference: Do you want a more authentic NBA experience, or a technical, arcade feel? 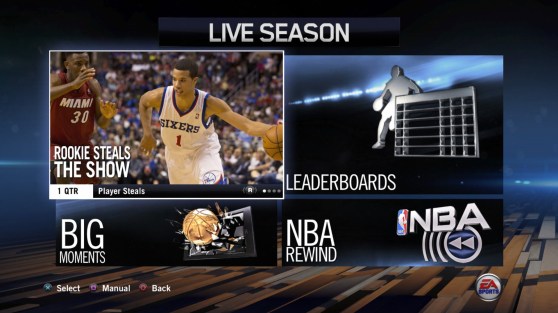 NBA 2K14 couples its EcoMotion game engine with Stats Inc., one of the biggest sports statistics companies in the world, to translate real-life NBA occurrences, such as offensive and defensive streaks, into the gameplay; NBA Live 14 employs this same aspect through an exclusive partnership with Synergy Sports Technology, the very same analytics company that all 30 NBA teams use for scouting. As Synergy collects data from real NBA contests, information will then upload to Live 14 within an hour after each game, affecting player performance for better or worse, depending on the situation. It’s much like 2K’s NBAToday feature, except NBAToday gets real-time updates. Instant gratification is a big part of gaming, so it’s hard to see players get keen about waiting for real-world game data after an NBA contest has finished.

The biggest glaring difference between these two basketball games lies within graphics. 2K14 has advantage on all visual fronts. This doesn’t mean that Live 14 looks bad, because it’s definitely a step up from current-gen visuals; however, 2K14’s motion capture of nearly every NBA player really stands out. It even accurately portrays the pros’ playing styles and shooting mannerism, along with the details of the league’s stadiums and crowds. The authenticity is just stunning.

NBA Live 14 exhibits great sprites, too, but according to EA, the designers did only a fraction of the motion capture with real NBA players that 2K did, using in-house talent for rest of the animations. Again, Live 14 looks next gen, but it doesn’t have the life-like appearance of it’s competitor. 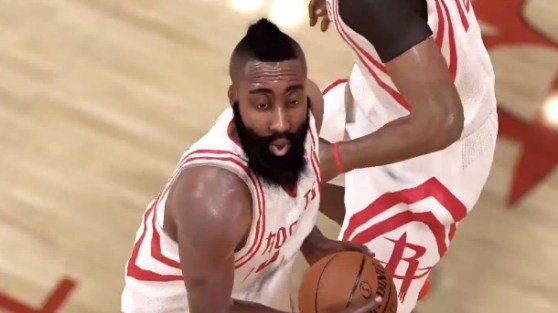 While 2K appears to have a couple of advantages, NBA Live 14 certainly presents an appealing package. Live 14’s online is completely revamped with pro gaming in mind, an exciting feature. Controls are manageable for causal players but have enough depth for devoted fans.

Even though NBA 2K14 is still somewhat shrouded as far as its full feature set goes, there’s nothing hidden from the visuals. The graphics are marvelous from any angle. And the gameplay, as 2K Sports describes, is designed to mimic the real world, which is where all that motion capture really pays off. How that translates into gameplay has yet to be revealed, but we’re told to expect authenticity.