Among the Xbox One launch titles, Crytek’s Ryse: Son of Rome clearly stands out to me as the must-have game. This may be a little obvious, given relatively few blockbuster-style exclusives in Microsoft’s debut titles for its game console, which launches on Nov. 22. 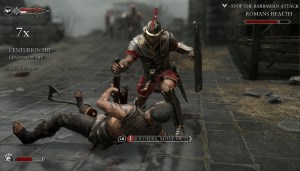 Above: Ryse: Son of Rome

I played the initial level of the game at a recent Microsoft event, and I was much more impressed with the title than when I saw it at the E3 trade show in June. In the game, you play a Roman general named Marius Titus. You can fight your way through barbarian cavalry, mashing buttons to attack foes and slice their limbs off with your sword, or you can command troops to launch arrows or fire scorpios into crowds of enemies.

The graphics look great, and the game does a good job of blending cool fighting and killing animations with a lot of gameplay button pushes. It’s a fast-and-furious title, and Crytek does a good job zeroing in on gladiator-style battles and pulling out to show an epic battlefield where two armies clash. It clearly shows that Microsoft has no more qualms about showing an extremely bloody, violent game as the centerpiece of its entertainment strategy.

I also thought that a number of other games also looked good on the Xbox One. Those include Electronic Arts’ Battlefield 4, Activision’s Call of Duty: Ghosts, Capcom’s Dead Rising 3, and Microsoft’s Forza Motorsport 5. All told, it’s a very good line-up. And altogether, Microsoft has 22 games coming at launch. Some of those are downloadable titles that should warrant your attention, including Crimson Dragon and Killer Instinct. I didn’t see it yet, but Need for Speed: Rivals from Electronic Arts should also be a hot one.

Dead Rising 3 is impressive on the next-generation box because you’ll see just how many zombies can fit on a screen at the same time. Forza also looks beautiful. I’m looking forward to getting closer looks at Battlefield 4 and Call of Duty: Ghosts on the new platform.

So far, it looks like a fairly even match in the next-generation console wars. Sony will have a good line-up among its 21 launch titles. While it doesn’t have a PS 4 racing game exclusive, Sony does have Gran Turismo 6 coming for the PlayStation 3. That series has sold more than 70 million titles, and it could be one of the last monster hits of the current generation. There are more than 80 million PS 3 consoles in place, which gives a huge potential market for Gran Turismo 6.

Sony’s major exclusives include Mark Cerny’s Knack and Killzone Shadow Fall. I’ve also played some big chunks of those games. Overall, I give the advantage for the best launch titles to Sony, since those two games are impressive. Knack has wider appeal to family members beyond the hardcore fan. Killzone is also a sophisticated shooter game with innovations such as a drone that help you out a lot on the battlefield. The main flaw I saw, however, was that the maps are big and there is often no good way to find out where you have to go next in the single-player campaign.

Sony will get some good buzz by launching a week earlier than Microsoft on Nov. 15. Sony also has an advantage because its console costs $400 while Microsoft’s costs $500 (though Microsoft comes with built-in Kinect motion-sensing, while Sony’s camera is sold separately).

I think the wags are right when they say both sides will win this fall by selling out their consoles to the faithful. The real test comes in the spring and during the holidays in 2014, as Phil Spencer, head of Microsoft Game Studios, told GamesBeat in an interview. By that time, Respawn Entertainment’s Titanfall will be in the market. That game is looking like a cool addition to the first-person shooter genre.

Of course, some of the big cross-platform games are going to equalize things, making fans on both sides happy. The big titles on that front include EA’s sports games, Assassin’s Creed IV: Black Flag, Battlefield 4, Call of Duty: Ghosts, and Just Dance 2014.

With so many titles on both sides, I can’t complain. The old cliché still holds true: Gamers are going to win.