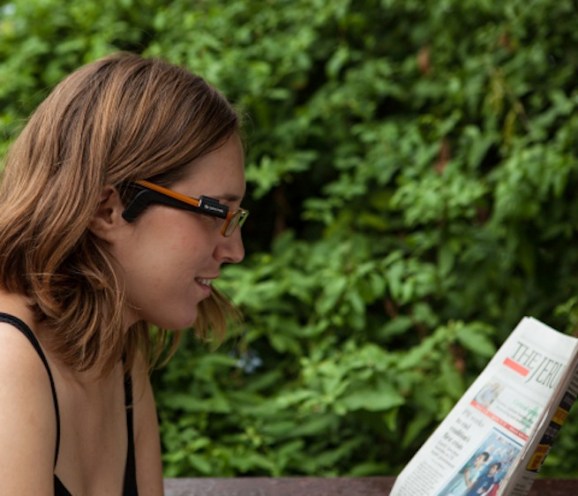 The OrCam device can interpret words on a page

Liat Negrin has had trouble with her vision since childhood. But on a recent day, a film crew recorded the Israeli walking into a grocery store and doing something that’s always been difficult for her — reading the ingredients on a cereal box.

Thanks to a very special pair of glasses.

Negrin is one of the first people to test a new computer-assisted vision device, developed by an Israeli startup called OrCam Technologies.

The glasses interpret nearby visual inputs, including letters, faces, objects, products, places, bus numbers, and traffic lights. A wearer simply points to an object in front of them, like a container of soy milk in the fridge or an approaching bus, and the device describes what it sees out loud.

“Getting around used to be so difficult, but now I can easily check the color of the traffic lights,” said Negrin.

OrCam cofounder professor Amnon Shashua is an expert at building technology that can recognize many types of objects, including words on a page. He took a leave of absence from the Hebrew University in Jerusalem to develop the product full-time and recruit workers to bring it to market.

“Helping those with low vision seemed like the most natural first application for such a technology,” OrCam vice president of engineering and business development Erez Na’aman told VentureBeat.

The device sits on a pair of glasses, and was developed in a partnership with Freescale, an Austin, Texas-based public company that makes semiconductors and processors. It runs on a high-speed Freescale application processor and employs complex computer vision algorithms.

About 100 people with visual impairments have tested the device so far. Early beta studies have shown that it works most effectively for people who have some degree of vision, not those who are completely blind.

The device is available for $2,500 and is not currently covered by insurance. However, Na’aman is reaching out to providers and payers and hints that the price may drop in the near future.

The designers are still adding more functionality to the software, including language recognition, so OrCam can recognize Chinese and French. “We are always thinking about future possibilities for the technology,” said Na’aman.

Check out the video below to see the artificial-vision glasses in action.