Twitter’s IPO is tomorrow, and the company could be worth as much as $16 billion, if it prices itself at the top end of its range. Or it could be valued much higher, if the stock pops on opening day.

The interesting thing is, social media and Wall Street are of two very different minds about that.

“Investors expect to see a share price of $43.60 at the end of day one,” a representative of financial services company IG told me via email. “Nearly three weeks ago … the expected market cap hit $33 billion, equal to more than $60 a share [but] has since levelled off which usually indicates investors believe it has reached a fair value.”

That optimism isn’t shared by Twitter’s own users, or Facebookers, or people on social media in general.

“People are overwhelmingly negative about Twitter’s valuation price,” a representative from social monitoring company Digimind told me. “More than 76 percent of online mentions were unfavorable in relation to Twitter’s share price or valuation. When looking at conversations just on Twitter itself, that number skyrockets to 94 percent of comments being negative.”

IG runs a gray market in which clients can take a financial position on a company prior to its official stock market debut. Twitter’s been extremely popular there, with prices passing double Twitter’s latest stock market pricing, and it’s not the only grey market to showcase that behavior.

Digimind monitors social media on Twitter, Facebook, Google+, and other social networks, and the people are not impressed.

Mentions of Twitter itself are still positive, or at least not negative, and even mentions of the Twitter IPO, TWTR (the company’s stock symbol), and Twitter Stock are at least mildly positive. But when it comes to Twitter’s share price, the people seem determined to push it down: 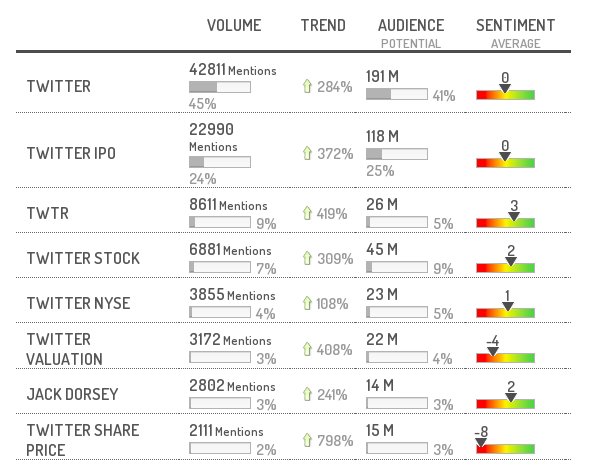 Tomorrow, of course, is the fateful day.

And, the day on which we’ll find out who is right and who is wrong — Wall Street, or social media’s Main Street. Share your opinion in the comments below.