German online game publisher Bigpoint has been testing its Merc Elite modern-combat multiplayer online battle arena (MOBA) game in recent weeks, and it has high hopes that it will become a flagship game that could turn around the company’s fortunes. 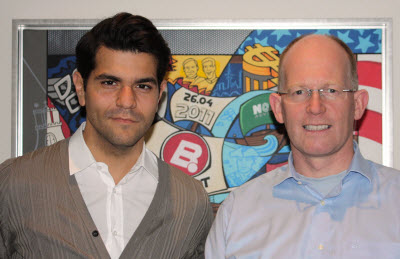 Above: Khaled Helioui and Kess Koolen.

The MOBA title is one of 50 online games operated by Bigpoint, but it is an example of the company’s new focus on high-quality games under the leadership of new CEO Khaled Helioui. In an interview, Helioui said the game is an attempt to make a game like the popular League of Legends free-to-play online game that has become a huge blockbuster worldwide. But it is in a new genre that has very little resemblance to other titles, Helioui said. Bigpoint has worked on the title for the past two years.

“It integrates elements of strategy and direct targeting that you see in shooting games,” Helioui. “It brings a new fresh air that is quite needed in our industry now. This is the most ambitious game we have ever made.”

The game isn’t available in the U.S. yet, but the company has started its open-beta testing in Europe. In the game, five players play five others in furious fast-action combat. Mercenaries square off against each other, fighting for either guerilla factions or corporate conglomerates.

“It’s at the crossroads of League of Legends and Counter-Strike,” Helioui said. 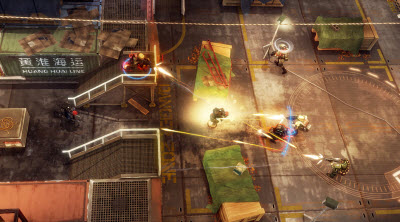 The Hamburg, Germany-based Bigpoint is also announcing today that it has added Kees Koolen, the chairman of the successful online hotel booking firm Booking.com, as a nonexecutive director.

“To build a good company, you need to build a great team, and this company has a lot of potential,” Koolen said in an interview. “You have to keep listening to the market and pick the right people. That’s a challenge for Bigpoint. If you want to be a truly global company, you have to think about how you want to do that. I want to help them with their decisions.”

Bigpoint has 650 employees and more than 340 million registered gamers in 200 countries. The goal is to make Bigpoint into the preferred destination for online gaming. Bigpoint expanded rapidly in the U.S. under its previous CEO, but it has now concentrated development in Hamburg and Berlin. Helioui plans to release about one game per quarter.

Bigpoint acquired a team to build the game and brought in a senior producer who worked on the Dawn of War series.

The company started an open-beta test of its Drakensang Online game in South Korea a couple of months ago. The game has been live for two years in the West, but now South Korea has already become the No. 2 market worldwide in revenue for Drakensang. Bigpoint will launch Drakensang in China next February. The company is also working on a Game of Thrones title for next year.

“I think we’re in pretty good shape right now,” he said. “Now that Kees has joined us, the potential is unlimited. The global gaming market is $70 billion, but no single company has more than 5 percent market share.”