Now you too can control the ultimate power in the Galactic Empire with Disney’s Star Wars: Tiny Death Star, a new mobile game launching today. 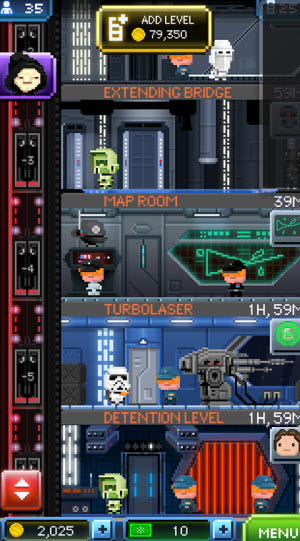 Built by mobile developer Nimblebit, the creator of the Tiny Tower game, Star Wars: Tiny Death Star puts you in charge of a huge space station that you can build out and then use against planets that are friendly to the Rebel Alliance. The alliance between Disney and Nimblebit is reminiscent of Disney’s collaboration with Imangi Entertainment, which built the Temple Run games.

In that alliance, Disney built reskinned games such as Temple Run: Brave and Temple Run: Oz. That was a smart way to get big on mobile. It used the proven and popular gameplay of the “endless runner” genre and the power of a Disney brand to attract millions of gamers, who downloaded and played the mobile games.

It’s not a particularly creative strategy, but it works. What could go wrong in the combination of popular gameplay and a big brand like Star Wars?

Tiny Death Star features 80 different Star Wars-themed levels and 30 species. You can be Wookiees and Ewoks. You can switch sides to the Dark Side and then build your very own Death Star.

And like Tiny Tower, this Death Star has luxury accommodations, like shopping malls and apartments. The 8-bit builder game is available now on Windows Phone, Windows, iOS, and Android devices.