The GameStick controllers sync through Bluetooth, but in my experience they sometimes don’t want to recognize the console unless you’re standing right beside your television. Oftentimes I would have to either reset the console or repeatedly turn the controller on and off to get it to pair correctly. Standing closer to the TV definitely made this process easier, but expect to fumble a bit with syncing at first.

Other times, the controller recognizes the console, but the analog sticks are exceptionally sensitive. I was afraid after putting the GameStick in my bag when I brought it home from work the first time that I’d inadvertently damaged the sticks. But after turning the controller off and then going through the grumpy syncing steps again, the sensitivity stabilized.

Once you get the controller synced, you’re free to move around your living room. It’s just the initial boot up process that’s tricky.

When I started playing around with the GameStick, I wanted to download as many games as I could. My excitement turned into an accidental stress test on the poor little console that lead to it freezing and getting incredibly hot before I unplugged it. After contacting PlayJam, it turned out that the GameStick was trying to do too much at once and was freezing because of it. PlayJam later sent out an update that resolved this issue, but some freezing and resetting still occurs.

Canceling actions repeatedly, flipping through menus quickly, and trying to access gameplay videos all have the potential to send the console into a daze and often force you to unplug the GameStick and reboot. Like the multiple-downloads bug I experienced, I expect PlayJam can address these issues with future updates, but it is worth being wary of possible freezing hazards.

The good news is that I’ve never had the GameStick freeze during a game and have experienced little controller lag. So the game playing part of the console works pretty well while the user interface still has a few problems for the developers to work out. 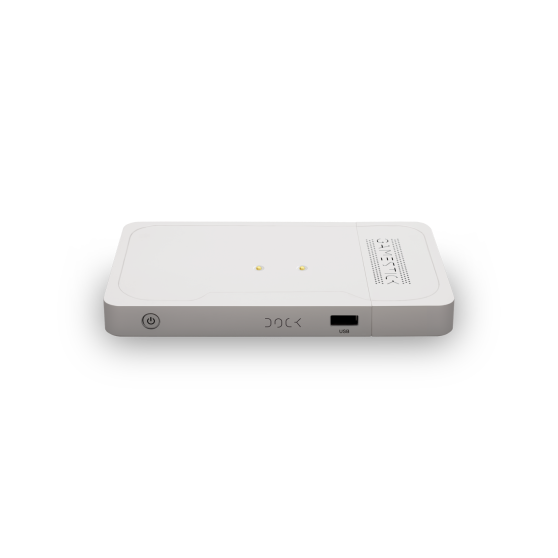 Above: The GameStick dock provides 64GB of extra storage and charges the controller wirelessly.

It’s likely that if you have any other game console, an Apple TV, or a Roku, you’re familiar with streaming content to your television. The GameStick supports a native media player that only reads content you insert (through the micro-SD card or external drives) and the Tofu Media XMB (cross media bar) interface.

Through the XMB, you can stream web video like YouTube, Giant Bomb, Wired, and a host of other websites that opened up their content for media servers. Unlike the smooth game UI PlayJam created, the Tofu XMB is a potential nightmare for people unaccustomed to the gritty underbelly of streaming content and setting up feeds. Roku and Apple TV handle all the fiddly stream setup for you, and provide prettier menus so you’re not slogging through folders and lists without a little help. XMB interfaces appeal to people who want more control over their content but it can overwhelm less experienced people.

If you play around with it long enough, you’re sure to figure the XMB out, but the end result might leave you asking why you bothered. I used the XMB for a while and attempted to watch videos from YouTube, Giant Bomb, and PBS but the playback was almost always sluggish. The audio was choppy across the board, and sometimes videos refused to load at all.

I imagine that if you go ahead and buy the additional $50 dock for the GameStick and hook it up through the ethernet connection, the video performance and quality would increase considerably. But the dock defeats the purpose of buying a portable Android home console if you have to drag it around with you as well to get decent stream quality.

If you have anything else in your house that can stream video, I recommend using that for web content and keep the GameStick around for games. It is a console first and definitely behaves that way.

The one area where Ouya really has the GameStick beat is offering free trials. GameStick gives you tons of screenshots and videos to browse, but you’ll ultimately be buying games untested if you aren’t already familiar with the mobile versions. This was moderately disappointing when I bought Muffin Knight expecting more of a platforming adventure than a manic “gather all the muffins” obstacle course.

The GameStick is a competent Android home console that I think is more accessible than the Ouya thanks to its simple setup process and superior controller. It might look silly at first, but it is a great way to play popular mobile games with a controller. The library PlayJam intends to have at launch is well suited for Bluetooth controllers, and I’m happy they decided against adding a touch panel (unlike the Ouya). You likely won’t see Angry Birds on the GameStick, but since nearly every touchscreen device on the planet has access to that game, you can focus instead on inventive platformers, puzzlers, and shooters that definitely benefit from responsive controls.

I think the GameStick is a great and affordable alternative for parents who want to let their children play mobile games but who worry about handing kids a smartphone or tablet. Parents can control the content their children see and all purchases require a password, even if you’re buying games in quick succession. The GameStick also doesn’t have a web browser, which means kids can’t surf the web when you’d rather they didn’t.

Overall, I love how responsive the buttons are, the direction PlayJam is taking their game content, and the easily navigated menus. Occasional freezing and rebooting are the biggest drawbacks, but I’m confident the developers will sort those hiccups out soon. I experienced their quick work on fixing a potentially disastrous performance issue first hand. While streaming nongame content is a bit of a disappointment, the GameStick is a satisfying alternative to buying Android based tablets and smartphones if all you want to do is access games released on that operating system. In fact, PlayJam’s little console might be the only Android-based device I’ll ever own.

The GameStick launches Nov. 8 through Amazon and GameStop. PlayJam provided a prerelease retail version of the GameStick for this review as well as a $50 gift card to purchase games.