If Heidi Zak Spector and Dave Spector have anything to do with it, you’ll never buy an ill-fitting bra again.

The Silicon Valley-based couple have developed a new iPhone app, launching today, for women to get sized using what they call “virtual measuring tape.”

Using ThirdLove, with a few snaps with your iPhone, you’ll receive an accurate bra-size measurement. It’s a huge market opportunity, with recent studies showing that 80 percent of women are wearing the wrong-size bra.

Spector, a former investor at Sequoia Capital, is taking the lead on developing the app. He’s recruited some of the top computer vision experts in the country, who are working on perfecting the virtual fit technology. Meanwhile, Zak Spector is applying over a decade of relevant experience at top consumer brands, like Aeropostale, to design a line of customizable ThirdLove lingerie, which you can buy directly on the app. 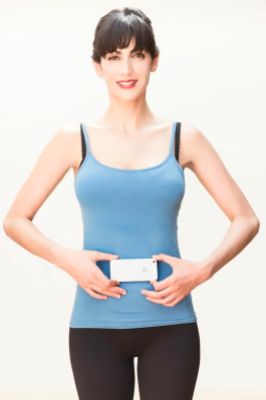 Above: Hold your iPhone against your belly button to take an accurate reading

“Women don’t like the current experience, and they are looking for something better,” said Spector in an interview at the VentureBeat offices. “Technology can help in a lot of these situations — and it will work in other retail categories as well, not just bras.”

The process is simple enough: Download the app, and stand in front of the mirror in a tight-fitting tank top or just a bra (anything but a push-up will do), and take a few photos in front of a mirror.

It may take a bit of adjusting and tilting of the screen before the app will spit out an accurate size. For some women, you’ll get a reading in a few seconds, and for others it can take over ten minutes. Either way, it’s a far less awkward experience than getting sized in a physical store.

The only catch is that ThirdLove has its own numbering system, so you won’t be able to find out your size, and go buy a Victoria Secret bra.  The ThirdLove size starts with “TL” and is followed by three digits.

After getting sized, you’re encouraged to buy one of a ThirdLove bra, which price anywhere from $45 to $70. You can customize it how you like (add lace to the straps, for instance), and purchase matching panties.

According to the founders, the decision to develop their own system was intentional, as sizes wildly vary from store to store. Moreover, ThirdLove offers half sizes — Zak Spector has found that about 60 percent of women aren’t quite an A, B or C cup, but fall somewhere in the middle.

About 10,000 women have been enrolled in the beta program so far, and have offered feedback on the app. Spector won’t reveal how many of these women have actually bought bras after downloading the app — but he does stress that it’s a very high conversion rate.

San Francisco-based ThirdLove isn’t the only startup helping women buy the perfect bra. In fact, Silicon Valley seems quite obsessed with this category, especially in the wake of advancements in virtual sizing technology. True&Co, a company founded by two former Microsoft execs, also recently raised $4 million for its bra-fitting technology.