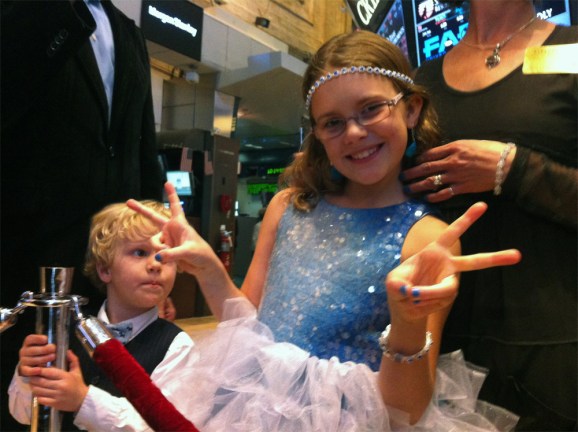 NEW YORK CITY — One person can change the world.

That’s the message Vivienne Harr, the philanthropic 9-year old behind Make A Stand, relayed to VentureBeat on Thursday morning, just minutes after she rang the opening bell that kicked off Twitter’s IPO at the New York Stock Exchange. (She had a little help from actor Patrick Stewart.)

“Today, we rang the bell for hope and freedom,” said Harr, beaming. “You don’t have to be big and powerful to change the world.”

In May 2012, Harr saw a photo of two child slaves in Nepal. She was under the impression that slavery ended after the U.S. Civil War — and the picture inspired her to act. So she started a lemonade stand to raise money for Not for Sale, a nonprofit that fights modern-day slavery around the world, which she intended to operate for an entire year, rain or shine.

On the 173rd day of her journey, as she sold lemonade to passersby in chilly Times Square, she hit $100,000. And she kept going. 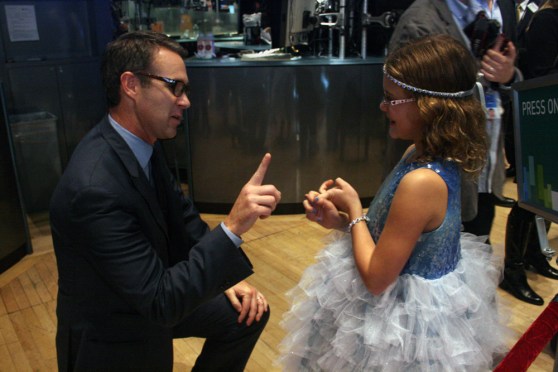 Harr’s journey eventually materialized in Make A Stand, a lemonade bottling company that donates 5 percent of its revenue to organizations like Free the Slaves, UNICEF, and the Nepal Youth Foundation.

When Twitter heard about Harr’s humanitarian efforts, the company invited Harr and her family to join them in New York to help usher in its IPO. Harr’s finger pressed the button that activates the NYSE bell, which marks the beginning of the trading day.

“What she built allowed her moment to become a movement,” he told VentureBeat. “She wants to end child slavery in her lifetime, and we’re going to help her do that.”

Stay tuned to VentureBeat for continued coverage of Twitter’s IPO.