Nvidia is once again launching what it calls the “best gaming GPU on the planet.” In short, it’s the company’s fastest graphics card using its fastest available graphics chip.

The new card will be able to play games like Batman: Arkham Origins and Assassin’s Creed IV: Black Flag at a resolution of 4K, or twice the resolution of high-definition TV. And you can do that with all of the settings for physics and other graphics features turned up. 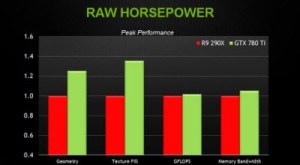 Above: Nvidia faces off against its rival AMD

The Nvidia GeForce GTX 780Ti is available today and is aimed at delivering an immersive experience for PC gamers. Nvidia says it this new card is record-breaking when it comes to performance, but it’s also cool and quiet. It has 2,880 CUDA cores, or 25 percent more than the predecessor GeForce GTX 780. It has 7 gigabits per second memory bandwidth and 3GB of graphics memory. It costs $699, and Nvidia says the GPU is faster in raw horsepower than Advanced Micro Devices’ rival chip, the Radeon R9 290X GPU.

The GTX 780Ti also supports the upcoming G-SYNC display technology that eliminates screen tearing (when graphics get all screwy because half of the screen is ahead of the other half) and other problems known as display subsystem-generated stutter and input lag. It also has a new power-balancing feature so that a hardcore PC gamer can get more out of the system by overclocking it, or running the card faster than specified.

The card has a striking industrial design. It has an aluminum cover, LED backlit GeForce GTX logo, and a clear, polycarbonate window. The card features ShadowPlay, or the capability to capture your game video and share it with friends. You can also use the Nvidia Shield handheld device to stream games from the card (and a PC that has it) to the living room display.