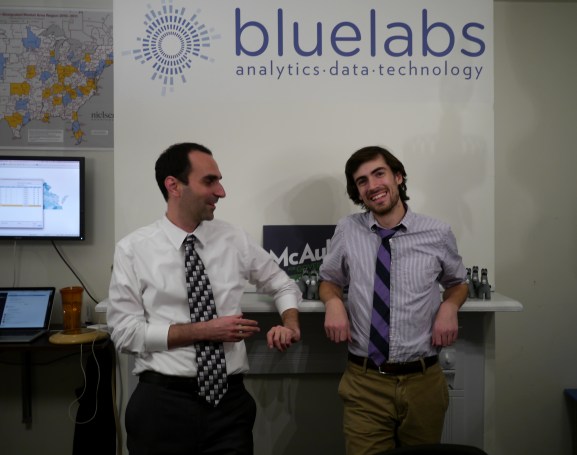 A year after they finished poring over and making models on U.S. voter data, a team of data analysts who worked on the 2012 Obama for America campaign today launched a startup called BlueLabs. The idea is to democratize the methods that lead to the Obama campaign’s success.

“At the end of the cycle, we knew that we had something special, both in terms of sort of our approach and the team members, and we really wanted to carry this on and sort of expand the scope,” said Chris Wegrzyn, a cofounder.

The group is targeting nonprofits, progressive organizations, and smaller Democratic campaigns. (Republicans, by the way, have at least one data-savvy company to tap: TargetPoint, whose chief data scientist, Alex Lundry, was director of data science in Mitt Romney’s campaign.)

As for BlueLabs, it has worked for Cory Booker’s recent senatorial campaign in New Jersey and Terry McAuliffe’s 2013 gubernatorial campaign in Virginia. Both politicians won their elections. The Human Rights Campaign and the Camden Coalition of Healthcare Providers, founded by MacArthur Fellow Dr. Jeffrey Brenner, are also customers.

The startup employs almost 20, which seems like a big squad for a company whose typical customers might not have as much money as a major presidential candidate. But BlueLabs is in fact profitable, said Wegrzyn, who was previously director of data architecture at the Democratic National Committee. And the company is hiring.

“From a business perspective, it’s a very healthy business, and we’re really, really happy,” said Elan Kriegel, a BlueLabs co-founder who was the battleground states analytics director for the Obama campaign.

Still, the company would be open to taking on funding in the future. “If the right sort of challenge and the right partner comes along, then we’re absolutely interested,” Wegrzyn said.

BlueLabs can do a few things for customers, including data integration, consulting on analytics, and audience targeting. But a key function is developing statistical models to predict how people behave and how they might change their minds — which is what Obama campaign workers got lots of attention for after the 2012 election.

Trouble is, useful models require data, whether it’s on party registration, demographics, or online behavior. The company can be of assistance in that department, too.

“In Democratic politics, we kind of — I’m sure you’ve read about it, but we’ve had kind of a little bit of a leg up on the Democratic side because the party has been invested in doing that for so long, and we’re really fortunate,” Kriegel said.

At the same time, Kriegel said, he and his colleagues are “very, very cognizant that we’re not going to use the same hammer on every problem.” They’ll listen to what organizations want to achieve and develop appropriate ways and means in response.

But there’s no guarantee that demand for BlueLabs’ services will continue to grow, given that big money won’t always be involved. And that could apply for other startups determined to bring data science to the masses, too.

Rayid Ghani, who worked alongside Wegrzyn and Kriegel during his time as the Obama campaign’s chief data scientist, and who now has his own analytics-for-social-good startup, Edgeflip, says companies like theirs could need to draw on outside capital.

“Whether there is enough opportunity in that, the honest answer is (that) I don’t know. My hypothesis is there is, but that needs to be tested,” said Ghani, whose company’s first product aims to analyze data from Facebook and determine whom nonprofits should reach out to first.

Perhaps venture capitalists would be willing to fund Edgeflip. Or maybe a large foundation that already donates to nonprofits would want to support or direct business to the company and help maximize donations through data analysis. That way every nonprofit wouldn’t need to splurge if it wants to benefit from data science.

Edgeflip and BlueLabs aren’t the only groups trying to use data to solve problems for organizations other than the webscale companies where data science has become popular. DataKind, itself a nonprofit, gets data scientists to voluntarily work on certain projects. And Civis Analytics, like Edgeflip and BlueLabs, has roots in the Obama campaign and recently took on an investment from Google executive chairman Eric Schmidt.

While these groups could score points for their civic-minded efforts, profit-and-loss statements aren’t going anywhere. (Nor is Form 990.) The question is how much nonprofits and smaller political campaigns will want insights from data, and for how long.

Editor’s note: Our upcoming DataBeat/Data Science Summit, Dec. 4-Dec. 5 in Redwood City, will focus on the most compelling opportunities for businesses in the area of big data analytics and beyond. Register today!