Thanks a successful IPO opening day, Twitter now has a warchest of $1.8 billion. And according to some analysts, a lot of opportunity to spend it.

“Twitter has a long M&A shopping list with dozens of target private companies the microblogging service is targeting for purchase,” PrivCo’s Same Hamadeh said in a research note. “Twitter will use its rich stock to buy companies straightaway, adding to its revenues and further justifying its high valuation.”

Above: Actor Patrick Stewart examines the Twitter logo as he stands next to child activist Vivienne Harr, who helped him ring the opening bell.

That high valuation does demand some justification. And it’s unlikely to be justified anytime soon with massive revenue or, perish the thought, actual profit. Twitter has pulled in $422 million so far in 2013, but it has a net loss of $134 million, up 89 percent since last year. With anemic growth figures, Twitter will likely need to keep spending on growth, so that loss number will take some time to turn into a profit.

“In our opinion Twitter will justify its steep valuation through both organic growth and through an imminent acquisition spree,” Hamadeh said.

Clearly, Twitter wants ad tech companies. It’s also shown a tendency to purchase analytics solutions, especially those that tie ad metrics in traditional media industries, such as television and music, to digital ads on Twitter. With the massive rise of messaging platforms that are bringing in massive revenues, an acquisition there could add to Twitter’s communication chops and add revenue, although that’s counter to Twitter’s traditional openness.

And while Twitter has openly indicated its interest in the music business, its #Music app has not seen widespread adoption. An acquisition in the music space that did not conflict or compete with the music industry stars and companies that Twitter is seeking to cozy up to could be a good use of IPO cash.

Exactly what companies are on the social network’s target list, however, isn’t known.

One thing that is? Based on Twitter’s stock price today, Twitter’s founding trio of Evan Williams, Jack Dorsey, and Dick Costolo are now worth a combined $5 billion. 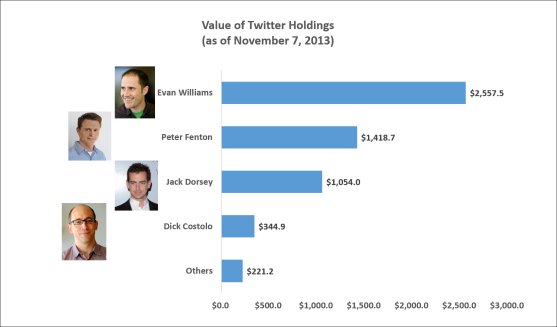