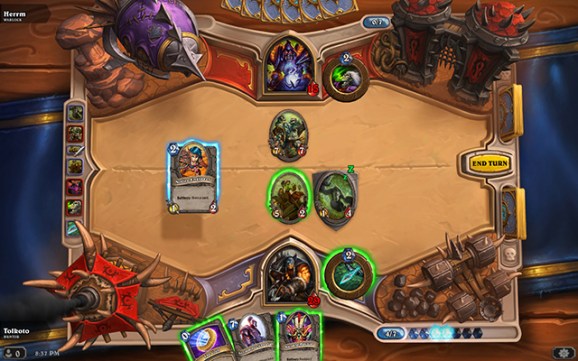 Hearthstone: Heroes of Warcraft for PC.

Blizzard plans on releasing a version of Hearthstone for iPhone and Android phones and tablets in the second half of 2014, according to chief creative officer Rob Pardo. These follow the iPad version, which is due out “next month,” but that could mean January in “Blizzard language,” the CCO said to an assembled crowd of fans at the studio’s BlizzCon event today.

Hearthstone: Heroes of Warcraft is a simplified collectible-card game for PC and Mac. It is currently in closed testing, but Blizzard intends to open up the beta to everyone soon.

Blizzard is holding the game’s first official tournament this weekend. The Hearthstone Innkeeper’s Invitational will bring in eight of the top players from the beta to compete live at BlizzCon.