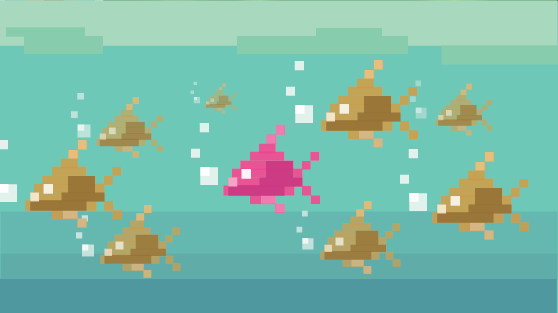 The industry is getting crowded, it's more vital than ever to make your game stand out!

REDWOOD CITY, Calif. — It’s an amazing time to be a developer in the game industry. The distribution, public relations/marketing, and funding trifecta that kept the old guard of “big publishing” in power for so long is evolving. Now, everyone from the inexperienced dorm room developer to the veteran contract development house have a much better chance of seeing their dream projects become tangible products.

In turn, this era of accessibility has created some new challenges for content creators. The one pro of the old system was that, although big publishers had an incredibly lopsided leverage over developers, publishers handled getting the game exposure and maintaining the product’s life cycle for their developers. When the high barriers of entry of the old system began to crumble, anyone and everyone could flood the market with their ideas. This crowded and constantly evolving environment can make handling the issues of a product’s exposure and life cycle exponentially harder for anyone, let alone developers who traditionally were not expected to handle these issues on their own. It doesn’t help that the line between the independent and commercial markets are beginning to blur; where it may soon not be a question of who is the biggest fish in two separate lakes, but perhaps that there are too many fish vying for limited consumer attention in one large market.

During the “Rise of the Big Indie Studios” panel at GamesBeat 2013, the discussion leaned toward how independent studios are successfully tackling the challenges of this new era of self-publishing. Steve Allison of TellTale Games, Jeff Graham of Wolfire Games/Humble Bundle, Craig Allen of Spark Unlimited, and Mathew Hannus of Sleepy Giant contributed to the talk, with three overriding philosophies dominating the discussion:

Develop a solid relationship with your audience — and pay attention

We’re not just talking about when your game is close to, to coin a retail product term, “going gold,” either. Developers can easily start building a relationship with people who show interest in their game even during the very early days of development. As Graham explains, “We were very open to experimenting with ways to just connect with the world in general. Back in the day, I would man a livechat widget on our website every waking hour; we were working 17 hour days. Anybody who happened by our website could ask me questions about our game developer process and what we were doing. What we gravitated on was this idea of open development … that we might be able to turn the development process itself into our PR and discoverability strategy.”

This early connection with the audience can also help you identify what sort of audience you are really attracting and how you may want to mold your project to fit that demographics’ demands. Allen adds, “I think if you look at this movement from, kind of representative business that’s creative to creators and their audience. You’ll find your own level. Maybe your audience is really big because you have mass market appeal. Maybe your audience is really niche. But you’ll be able to run your business according to the size of the audience that is interested in it. It will favor people that are life style oriented to their community.”

Making your creative talent forward-facing throughout all phases of the project’s life cycle may still seem like it is out of the game industry’s comfort zone, but as Allen points out, many other pop media industries have been making it a major part of their marketing for decades. “So, you know, in music, you look at Lady Gaga, she doesn’t just do an album go away and come back in two years with a new set of songs,” he said. “She is out promoting, doing concerts, doing appearances, doing fan reach out, she has her fan community, and she is engaged in a very transparent and unified way. You’ve got to eat what you make. It’s not this thing that we hired a bunch of people and we’ll just put a brand on a shelf and people will buy it because we told them to. The audience will support what they care about.”

This audience engagement during independent development can also fill in another void that traditional big publishers use to provide: a gauge for when a project is not working both creatively and commercially. No one wants to argue with a room full of creative people about who knows best about content (outside of other creative people and critics), but even the best artists require someone detached from the process to give heart breaking critical input. Without a publisher standing over the development team, acting as that heartbreaker that is not invested in the creative process, there can be a lack of honest constructive criticism both in content and direction of the product. As Allison explains, this is a pay-off independent developers must address, “With the access to distribution in your lap, it comes with a lot of responsibility to spend your money and time wisely, because now instead of a publisher telling you that it doesn’t work, you’ve got to be able to tell yourself … and that’s really difficult when you’re also passionate about what you’re making. That’s a radical shift in thinking because good content rules the day, so you got to make sure you’re making content people care about.”

Depending on the type of creative people involved on the team, this concept may also require a very difficult shift in gears. Craig Allen adds, “I remember we [Allen and Allison] were talking a couple years ago about that shift from product centric development where you, kind of like a novelist right? You go down, into the hole, you write your book. You get every chapter right. [You get] the expression of everything you want [created] and then you throw it over the wall and people buy it or they don’t. I know you guys [TellTale Games] had to struggle with just a whole different rhythm of production because now you’re on this treadmill. It’s market daily newspaper: You’re showing up, you’re writing the news article, you’re re-writing it the next day, you have new information, the audience gives you opinions, ‘Oh, I got to pull that in! The big story I thought was going to be a big story: nobody cares. I don’t know why they don’t want to know how Obamacare cost so much money for the website. We’ll drop that story line; we’ll pick up another one.’… But you’re shifting with the audience. That…from the talent perspective … I mean, we’ve seen that that’s a very different mix of talent. There are people who are just not comfortable releasing unfinished work.”

While the criticism element may be painful, audience engagement ultimately offers developers something that the big publisher middle men could not: clarity on what your player base enjoys. Craig Allen explains, “What I think is really exciting is this conversion [from the old system to the modern one] where the audience is really in control. Kickstarter is just the start of, I think, what I feel will be more and more real data driving the creation of products, services, games…in a way that creates a whole new structure. So whether it is talking to the audience, working with the community, figuring out who you’re talking to…you got to be a lot more targeted and a lot more responsive than this other system where you can kind of abstract things. [For example] ‘Nielson ratings says that this show is being watched’ … ‘I don’t watch it, and I don’t know anyone that watches it. Really?!?!’ … Oh, yeah, yeah!’”

So really nailing who your audience is and intimately engaging them can be an invaluable resource. It can provide you with information about your audience in general, what elements they value in you as a developer and provide a blunt analysis of if they like your product’s direction. It’s pure data from the tap that traditional big publishers use to spend considerable resources mining for, in order to provide their developers direction when shaping their projects.