With smartphone thefts on the rise in cities, it was only a matter of time until someone decided to bring the concept of a car alarm to your iPhone.

Say hello to Halo, a new iPhone 5 security accessory that’s kicking off its Indiegogo crowdfunding campaign today. It’s the first iPhone security gadget I’ve seen that implements a loud alarm, which is helpful for preventing both snatch-and-grab theft and those instances where your phone wanders off in the hands of a sly thief. Halo also packs in a few other helpful features, like extended battery life and a sound boost through its own speakers. 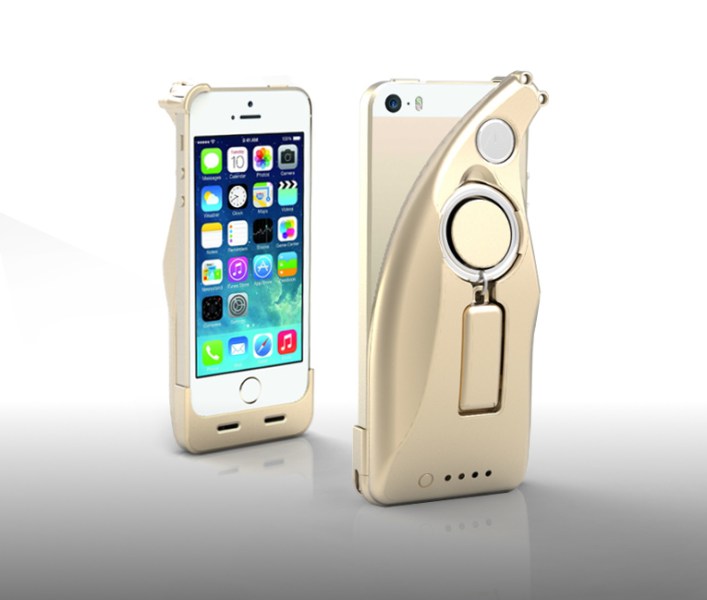 As you can tell from the pictures, you’ll have to sacrifice the iPhone 5’s thin design for security. But for anyone who’s ever had their phone stolen, it could offer priceless peace of mind.

The Halo device clamps onto your iPhone 5 with tiny torque screws (so a thief can’t easily remove it), and it sports a ring portion (the Halo Ring) that you’re supposed to hold when  using your phone. If someone tries to snatch your phone, the Ring snaps off, and the alarm (which can reach ear-piercing levels of 130 decibels) goes off. The Halo Ring also includes a proximity sensor, which can trigger the alarm if it gets separated from your iPhone after specified distances.

Once the alarm kicks off, the Halo app also triggers video recording on your phone to identify the thief, and it can also send off text messages with the GPS coordinates of your phone. There’s also an emergency button you can hit to trigger all of the security features if you’re in danger. Using the Halo companion app, you can program unique gestures to quickly disable the alarm whenever it goes off.

In my brief hands-on time with a Halo prototype, I found it to be surprisingly bulky. I also noticed that it didn’t fully protect one corner of the iPhone 5, which seems strange when it’s basically taking the form of a typical iPhone case.

Shane Smith, Halo’s chief executive, tells me the company is still working on additional Halo designs. He notes that the gadget was designed to fit ergonomically into the curves of your hand, which explains why it seems bigger than it needs to be. Ideally, a future Halo model will be much slimmer and offer complete device protection.

Halo hopes to raise $70,000 to start manufacturing the gadget. Backers at the $49 level will get one of the Halo iPhone cases, which is a significant discount from the intended $99 retail price. The company’s new Indiegogo campaign follows a prior crowdfunding campaign in April 2013 for the gadget’s concept and design.