Computer programming has declined in American schools over the past decade, in spite of its developmental value — not to mention career benefits — for kids. Only 10 percent of American schools teach computer science; girls and minorities are woefully excluded. This December, Code.org will reverse this trend, calling on millions of students to engage in one Hour of Code.

When we were nine, our dad returned from abroad with our first computer, a Commodore 64. Little did we know that we were receiving a life-changing gift: the opportunity to learn how to code. We fell instantly in love. Growing up in post-revolutionary Iran, we found in computer programming an escape from hopelessness, a new world limited only by our creativity.

By the time we moved to America as teenagers, we were proficient programmers and landed summer jobs that paid several times what other high schoolers could earn. We paid our way through college by teaching computer science to other students. By the time we turned 30, we’d each co-founded our own startups, both of which were acquired for a combined value of over a billion dollars.

Almost every Silicon Valley success story — from Bill Gates to Mark Zuckerberg — begins the same way: with a gift, an opportunity to learn how to code.

Why should opportunity be available to only a lucky few?

Coding embodies the American Dream. Yet, ironically, most Americans are denied access to this dream. In China, every high school student must take computer science to graduate. The UK and Australia will require it soon. Meanwhile, in America, only one in 10 schools even teach computer science — a number that has declined in the last decade.

The gender trend is worse yet. In the era of 1950s supercomputers, women were the pioneers in computer science. In the 1980s, 37 percent of students studying computer science were female. In 2013, it has dropped to 18 percent.

Tech jobs aside, teaching kids basic computer science is valuable no matter what career path they might choose. Every child can benefit from a strong foundation in problem-solving. As software is taking over the world, a rudimentary grasp of how it works is critical for every future lawyer, doctor, journalist, politician and more.

Every school in America teaches kids how to dissect a frog or that molecules are made of atoms. These are educational pillars that students have learned for centuries. It’s time for American schools to recognize a new pillar: computer science. Every American should have the option to learn to program a computer or how the Internet works.

For girls, learning to code is empowering. It builds self confidence and independence that can serve young women in any pursuit. If you’ve ever seen the pride in your daughter’s face after she has created a computer program all by herself, you’ll understand how coding can change a young girl’s trajectory.

For students from disadvantaged families, computer science is the ultimate equalizer. Computer science gives kids a reason to remain in school, not just because it’s fun and tangible, but because it offers a promise worth working towards, a door to a better future.

One obvious reason we’re behind is state-defined education standards: in 37 of 50 states, computer science doesn’t count towards math or science graduation requirements, resulting in low enrollment and programs being cut. This is easy to correct. Thanks to the advocacy efforts of Code.org and its partners, three states have changed policies this year to update graduation requirements to count computer science. 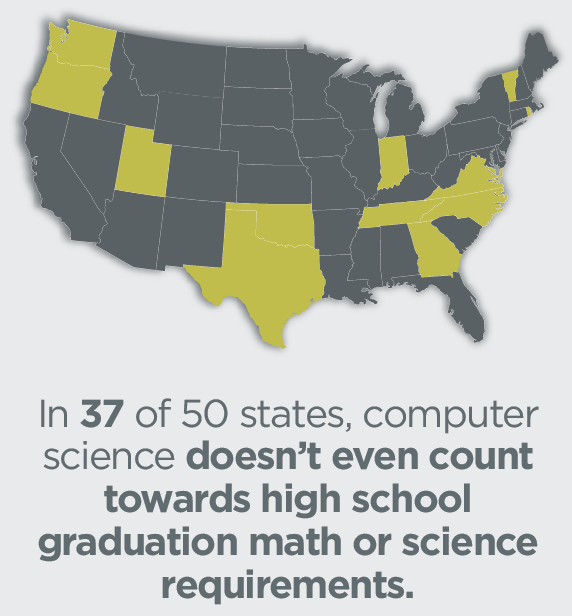 A harder challenge is to convince school districts that every school should offer students the option to learn computer science, and to get them the resources they need to do it. Code.org, with the support of Bill Gates, Mark Zuckerberg, Google, Microsoft, Apple, Amazon, and more than a hundred others, intends to reverse the trend starting next month.

The Hour of Code is coming 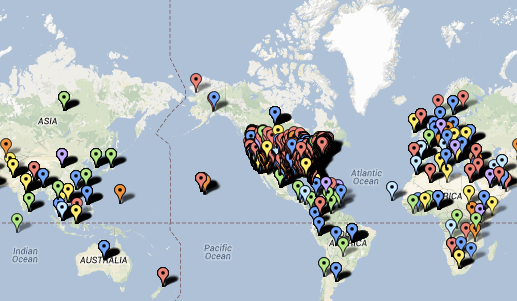 This December, in celebration of Computer Science Education Week (December 9-15), Code.org is calling on students, teachers and parents across America to try one Hour of Code. We are asking teachers everywhere to take one hour out of their week, to teach computer science. This is a campaign to prove that regardless of age, race or gender, anyone can learn the basics of computer programming.

With more than 1.5 million students already registered across 140 countries, the Hour of Code is now on track to be the largest online education event in history, demonstrating that the demand for computer science education knows no borders or boundaries.

We have an opportunity to lift up an entire generation of American youth, and we’re starting with one hour: one student, one classroom and one school at a time. Computer science is the new literacy, and as a core pillar of American education it will be the great social equalizer of our time.