It took Irrational more than seven months to go from releasing BioShock Infinite to releasing Burial at Sea, the game’s first story expansion. That’s a long time (at least these days) for downloadable content, and the question is — just as it was in March — is Burial at Sea worth the wait?

No. Not really. Not yet, anyway.

Burial at Sea is still a well-built game. It takes the refined action and Elizabeth mechanics from Infinite and puts it all in Rapture, the underwater city from the first BioShock. Only this time, we get to see what that world was like before its collapse.

Players again take control of Booker Dewitt. This time he’s a private eye in Rapture, and he doesn’t seem to have any knowledge of the story players shot their way through in Infinite. Elizabeth, the sidekick from the main game, joins players from the get-go in Burial at Sea. She hires Dewitt to find a missing girl, but she’ll do just as much health-tossing and tear-making as she did before.

Everything that works in Infinite works here. Some things work even better.

Elizabeth is just as smart and out of the way as you want in a computer-controlled ally. She won’t kill anything, but she won’t get you killed.

The combat is just as taut and satisfying as before. Weapons (and this expansion introduces at least one new one) are fun to fire, and the enemies aren’t completely dumb. Interestingly, Irrational made one small change with the opponents that actually makes the world feel more threatening and suspenseful: No room is every permanently clear of enemies.

In Infinite, as you cleared an area of the people trying to kill you, that was it. Once it was danger free, you could run back and forth through that area without ever coming across another enemy.

At one point in Burial at Sea, I decided to go off the main path to explore. When I returned with some new pants equipped, I was surprised to find that splicers — the crazy people that are trying to kill Booker and Elizabeth — had cut off the route I came in from. This surprised me the first few times, and it makes the world feel a bit more realistic and alive.

The look and feel of the environment

Of course, the best thing about Infinite was its world, and Burial at Sea’s living Rapture doesn’t disappoint.

I’m just as attracted to this Las Vegas-lit, under-the-sea metropolis as I was to Infinite’s floating city of Columbia. The design of the architecture and the world’s decor make sense, and I love absorbing every inch of each new room I come across.

Burial at Sea is probably the most aesthetically pleasing games to look at this year, and it’s really only in a class with its BioShock Infinite cousin. 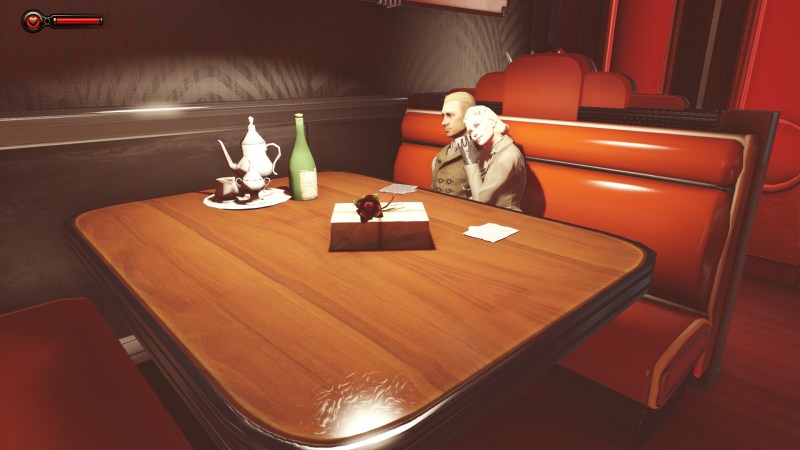 It’s still BioShock Infinite in some bad ways, too

As much as I love the ambiance of Infinite, I despise the cardboard stiff non-player characters that inhabit Columbia. Unfortunately, that complaint fully applies to Burial at Sea.

Every inch of Rapture is gorgeous, but it breaks when I stare into the dead eyes of one of its citizens.

When I look at these robot mannequins running through their animation and conversation routines, everything falls apart. The NPCs barely notice Booker and Elizabeth. They all look alike. Every fifth one has the same voice. If I focus on those characters for any length of time, the game starts to feel like a nightmare where humans don’t work like they’re supposed to.

Only the first half of Burial at Sea takes place in these populated areas, thankfully. After that, it’s nothing but roided-out splicers that are only capable of attacking — which, frighteningly, is a more familiar human reaction than anything elicited by the non-enemy NPCs.

Well, I didn’t learn much, and that’s kind of a bummer.

I won’t say that Episode One is completely anticlimactic because it isn’t. I just wish I knew when the second episode is coming because, right now, I’m unsatisfied. Sure, I want to see how it ends — Irrational does attempt to hook players with a cliffhanger — but if Episode Two doesn’t come along quickly, I might lose interest.

With Burial at Sea, Irrational’s greatest accomplishment is resuscitating Rapture. The city is a visual feast, and the developer once again proves that it has some of the most talented environment artists in the industry.

Irrational’s solid shooter mechanics and ability to set up an interesting mystery also make for a mostly enjoyable experience.

The wax-figure-like NPCs and mostly uneventful story, however, dampen a lot of the fun. It’s possible that once both parts of the two-episode Burial at Sea series are out, the story issues will evaporate. For now, hold off on Burial at Sea. It will only disappoint you.

BioShock Infinite: Burial at Sea – Episode 1 is the first in a two part expansion. It is due out Nov. 12 for PC, Xbox 360, and PlayStation 3. Publisher 2K Games provided GamesBeat with a special temporary Steam account for the purposes of this review.