Netflix released its monthly Internet service provider (ISP) speed rankings today, with one noticeable change to how they determine a score.

The company is now focusing more heavily on peak times instead of the average speed each user will reasonably be able to get when streaming videos on Netflix. A peak time would be when the largest number of people are watching something online at the same exact moment. Netflix likens this to a sort of “rush hour traffic” for the Internet, which is a pretty accurate way to describe it.

The company also released a graph showing how two well-known ISPs fair for customers streaming video from Netflix during peak times. Cablevision, the second-ranked ISP, sees noticeable drops during peak times, but nothing that’s too drastic. I’m guessing the majority of people probably wouldn’t even realize that the video quality had to be adjusted during playback. But Time Warner Cable, on the other hand, looks like the Grand Canyon during peak usage times. And during those dips, videos will appear in lower quality and possibly even stop to buffer. 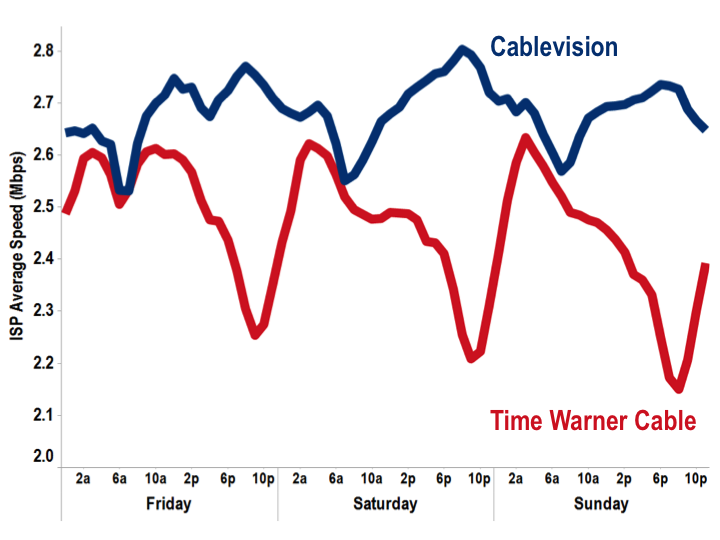 Above: A comparison of two ISPs video streaming playback during peak usage times.

Cablevision uses Netflix’s Open Connect platform, which helps ISPs minimize the massive strain Netflix puts on their overall network, thus speeding up the entire connection for everyone. Many of the big ISPs — including TWC — have been resistant to using such a platform for fear that others will look at the move as ISPs giving Netflix special treatment. Also, they don’t want every video service asking for similar terms.

But clearly Netflix isn’t just any video service. The latest report from Sandvine shows that Netflix accounts for 32 percent of all peak traffic in North America. Hulu, Amazon Prime, and all the new streaming options from cable TV providers represent a mere fraction of overall peak usage.

Poor downtime for ISPs that aren’t using Netflix’s Open Connect is likely to worsen before it gets better now that Netflix started letting all its members access “Super HD.”