Despite the multitude of streaming video services now available, Netflix and YouTube continue to dominate, according to Sandvine’s latest Global Internet Phenomena Report.

The report shows that Netflix accounts for 31.62 percent of all streaming video activity during peak times in North America, and YouTube takes 18.69 percent of video activity — that’s 9 percent higher than YouTube got in Sandvine’s previous report, which it attributes to more viewing on mobile devices.

When combined, that means half of those streaming video in North America are watching either a Netflix or YouTube during peak viewing times. 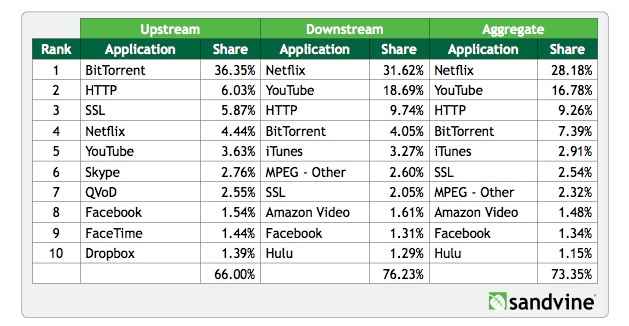 What you may find more interesting from Sandvine’s report is where some of Netflix’s competitors fall. Looking at the chart above, you’ll see that Amazon Video (which seems to indicate both its video purchase/rentals and its Prime video service) only accounts for 1.61 percent of peak streaming video, and Hulu grabs only 1.29 percent. That means these services really don’t have anywhere close to the kind of viewership that Netflix and YouTube bring in.