Developer Techland isn’t very subtle with its zombie-infestation plans. Its open-world zombie-survival game Dying Light comes out sometime in 2014 and will blanket all major platforms: Xbox 360, PlayStation 3, Xbox One, PlayStation 4, and PC.

The next-generation versions seem to be the most interesting so far and not just because they’re expected to look better. The developers are taking advantage of the new features on these upcoming consoles in small, clever ways — especially on the PS4, mostly due to its reimagined controller. “We actually have a whole team that works only on next-gen features,” Techland associate producer Maciej Binkowski told GamesBeat. “We really want the game to be as immersive as possible, to bring players as close as possible.”

Here are some of fun next-gen tricks that PlayStation 4 and Xbox One gamers will get to experience with Dying Light:

In Dying Light, the day-night cycle is dynamic. When the sun’s out, things are pretty tame, with only the occasional undead to worry about. But get caught out after dark, and the more aggressive zombies may get a you-sized late-night snack.

In the game, you can turn on a flashlight when you need extra illumination. When you do, back in the real world, the PS4 controller’s light bar will also brighten up with a strong, white beam to help pierce the darkness in your gaming room. It’s not for any practical purpose, of course — the developers are sure you already know how to navigate your living room with just the glow from the TV. But the light-bar business is simply for a small, additional layer of immersion during your zombie-killing sessions. 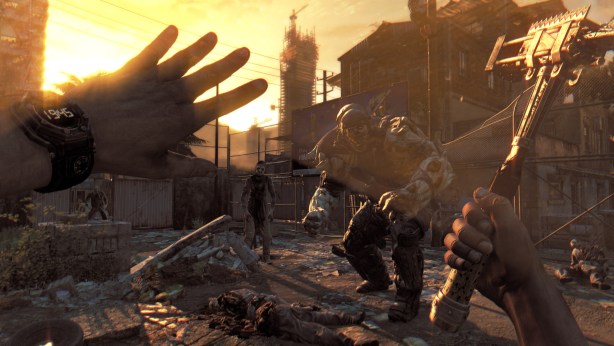 Above: What time is it? The later it gets, the more likely the undead appear. (Note: This is from the PC, not a next gen, version of the game.)

“Time is really important in Dying Light,” said Binkowski. “When it gets dark, it’s really dangerous, so you need to check the time. And what do you do when you check the time? You turn your wrist to look at your watch.”

The development team is working on gesture recognition (via the PS4 controller’s gyroscopes and the Xbox One’s motion-sensing Kinect camera) so that when you twist your left wrist in time-checking manner, your character will check his in-game watch at the same time.

When you receive a radio signal in the PS4 version of Dying Light, the sound will come in through the controller’s on-board speaker. OK, so that’s not the most innovative idea in the world since Nintendo’s last-gen Wii Remote also had this ability, but it’s still something that wasn’t possible on previous PlayStations.

Xbox One zombie-slaying game Dead Rising 3 also has this feature: When you make a noise in real life, the Kinect or PlayStation Camera can pick up the sound and transfer that to the game world. “Imagine you’re playing in co-op, and there’s a bunch of zombies coming,” said Binkowski. “I can actually start screaming [in person] to get them to come to me instead of you.”

We hope the game isn’t too scary, then. Legitimate yelps of fright might just make a bad undead situation that much worse. Next-gen technology: not necessarily for the faint of heart.