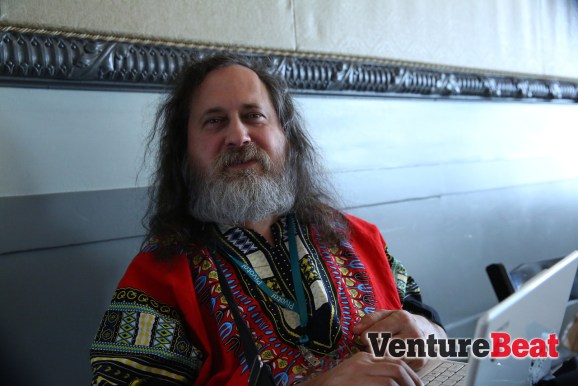 SAN FRANCISCO — Richard Stallman steps on the stage, runs his fingers through his gray-speckled locks, and quietly removes his shoes.

That’s not the usual start to a talk at a technology conference, but it’s not unexpected from Stallman, the activist, software developer, and outspoken founder of the Free Software Foundation.

It may seem trendy nowadays to champion Internet privacy and open access, particularly in the wake of the “outrageous” revelations about the U.S. government’s spying efforts. But Stallman has been fighting this particular fight for several decades. In the mid-’80s, he announced one of the most ambitious free software projects to date. He painstakingly developed — and then gave away — the complete Unix-compatible GNU Operating System for free to anyone who could use it.

Almost as soon as he steps onstage, the audience of software developers at DevBeat, where Stallman delivered a keynote speech this afternoon on the evils of computational idea patents, begins to snap photos of the famous computer programmer. Stallman hears the flashes and ceremoniously shields his eyes.

He then politely asks that no one shares these photos on Facebook, which he referred to as “monstrous surveillance engine,” or Instagram. He also requests that no video uploads to YouTube or distributed in Adobe Flash, in order to protect him from “Big Brother.” And he asked that people remove geolocation data from any photos that they do publish. [Editors’ note: We did.]

Stallman vehemently believes that software should be free and treated with the same reverence as free speech. He views that as a human right, and essential form of expression. Just don’t compare his beliefs to the “open source” movement, or you’ll illicit a strong reaction from him.

“Open source is a development methodology; free software is a social movement,” Stallman put it in a recent post.

But open source is not the enemy — not even close. Stallman has a much bigger target: the U.S. patent system. He has made it his mission to strike down “computational idea patents,” which he believes hold back creativity and give corporations an unfair advantage.

Stallman spoke at length about the evils of this legislation — at one point, philosophizing about how classical music in the era of Beethoven and Bach would have been prevented if they were faced with such patents.

It wasn’t easy to distill down his arguments, which are sprawling and complex. But I gave it a shot. Here are Stallman’s most compelling reasons for revoking software patents:

During the course of his talk, it became clear that Stallman isn’t a fan of patents for any sector. However, believes that patents are particularly treacherous for the software industry.

“People ask sometimes about other field who have been coping with patents for decades,” he said. Stallman doesn’t buy this argument, as “all fields shouldn’t be treated alike.”

“Ultimately the patent system is a misguided approach for software because it’s based on the assumption that there is a shortage of ideas,” he concluded.