Contrast looks promising at first glance for several reasons. The art design is downright haunting, the female leads are memorable, and the gameplay’s wrapped around an engagingly mature story.

But once you start to unfold the layers in this flawed platform-puzzle game, it quickly becomes clear that Contrast has too little depth. Despite some interesting characters and a clever level-design gimmick, the overall game is simply too bare.

Moving from shadow to shadow

Describing Contrast to anyone is really as simple as saying “the game where you move through the shadows.” That gameplay element is the main hook, and when it works, it’s incredibly satisfying.

That magic trick is a unique talent of lead heroine Dawn, a magic performer trapped in a parallel diminsion unseen by anyone but a small girl named Didi. Although her role is silent, Dawn can turn herself into a shadow, using other shadows to travel across buildings and through hard-to-reach areas.

It’s a game mechanic that gives you plenty of “Eureka!” moments along the way.

Most of Contrast’s puzzles require you to manipulate random objects and nearby light sources in order to build climbable shadows, usually bridging otherwise impossibly large gaps. Once you get the hang of it, you’ll actually be disappointed you can’t use Dawn’s magic trick everywhere else.

Solid characters in an intriguing mystery

For such a short game, Contrast does a solid job of making you care about Didi and her parents, a family torn apart by the father’s bad habits with money. Not only are Didi’s parents on the verge of a divorce, but her father’s mounting debt with the local mafia adds a grim element of danger.

That conflict is the driving force behind the action, and in-game text and some collectible reading material often tease the overarching mystery behind Dawn. Everything wraps up neatly in the end, and considering how traumatic things get for Didi, the closing scenes are very well written. 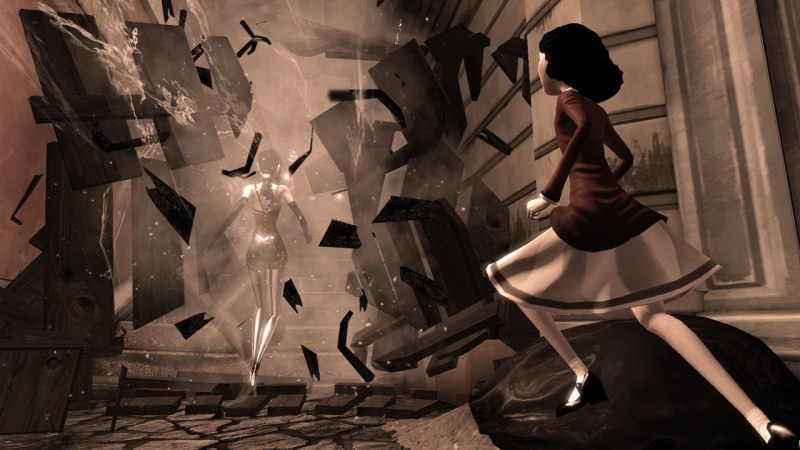 Above: Contrast's grim, ghostly world goes for noir style, but it's ultimately just flat and lifeless.

Contrast’s shadow-jumping mechanic sounds great, but the execution is simply terrible throughout much of the game. If you use Dawn’s ability in the wrong spots, it’s common to get her character model stuck within walls, trapped inside floors, or frozen on random objects.

I could forgive this if the levels and Paris’s streets were a bit more lively, but the world is so incredibly bare that it’s surprising you can find so many imperfections on such a lifeless canvas. Few other characters or moving elements populate the various set pieces, so the city looks and sounds like a stale crypt. Everything just feels dead. It’s a real shame, because there’s few worse ways to show off 1920s France than by stripping away all the local color.

It’s too short, too limited

It took me about three hours to burn through Contrast, and the level design didn’t seem like it had really done anything dramatic in such a limited session.

If you’re determined to try the game out, you’ll probably be disappointed that things finish up so quickly, even if you take time to hunt down all the hidden items around the city.

PC owners get the raw end of the deal on Contrast, which goes for 15 bucks on Steam right now. It’s really only worthwhile for PlayStation Plus members getting it as a free download, especially since it doesn’t even feel like it was finished on time.

All criticisms aside, I strangely don’t feel like Contrast is a bad title. It definitely fails to measure up against the rest of the PlayStation 4 launch library, but sadly falters even harder on its own merits.

Contrast comes out for the PlayStation 4 on November 15. The publisher provided GamesBeat with a digital copy for the purpose of this review.