We’re less than two months away from the 2014 International CES, and the Consumer Electronics Association isn’t wasting any time hyping up the show.

At its annual CES Unveiled event in New York City yesterday, we got a glimpse at some of the gadgets and startups that will be featured at next year’s show. We also learned that Yahoo CEO Marissa Mayer will be a keynote speaker at CES, taking over a role that Qualcomm’s CEO Paul Jacobs held last year.

Here are a few things that caught our attention at CES Unveiled:

While the solar power industry has been in a slump lately, that hasn’t stopped AspectSolar from delivering some intriguing new portable solar gadgets. Below, the company’s director of sales Andrew Goei shows off the Duo-Flex ($150), a light and flexible charger that’s ideal for charging your mobile devices during hikes.

The company also claims to have developed the first sun-tracking portable solar generator, the SunSocket ($2,000). The 25-pound device fits into a briefcase, includes a powerful Lithium Iron Phosphate battery, and is smart enough to track the sun throughout the day to keep your devices charged. While expensive, it could be useful for anyone who needs electronic gear off the grid.

The race is on to build the best smartphone at the lowest off-contract price. And with its $299 Project S phone, Taiwanese manufacturer Bungbungame may just have a solid contender. The Android smartphone sports a huge 5.8-inch display with a sharp 2,560 by 1,440 resolution, an octa-core processor, and a 16 megapixel camera.

While intriguing, the Project S is still very much a concept. Bungbungame is kicking off an Indiegogo campaign to build the phone, where it hopes to raise $5 million. The company has also produced some low-cost Android tablets. The Project S will compete with other powerful-yet-cheap phones from China’s Xiaomi, as well as Google’s latest Nexus phones.

In my brief hands-on time with the Project S, it certainly didn’t feel cheap. It’s all sharp edges and obsidian black (indeed, the edges were a bit too sharp for comfort). It also sports a glass rear, which may be a particularly unwise choice for such a large phone.

Just when you thought there’s no room for new headphone ideas, Muzik comes along with its stylish (and somewhat wacky) socially connected wireless headphones ($300). Yes, these things actually let you broadcast what you’re listening to to your friends on Facebook and Twitter with the touch of a button. I’m not sure why you’d want to do that, but I’ve given up trying to understand the listening habits of kids these days.

Muzik also offers socially connected in-ear headphones ($130) and a “smart cable” ($60), which can add social features to your current pair of high-end cans. 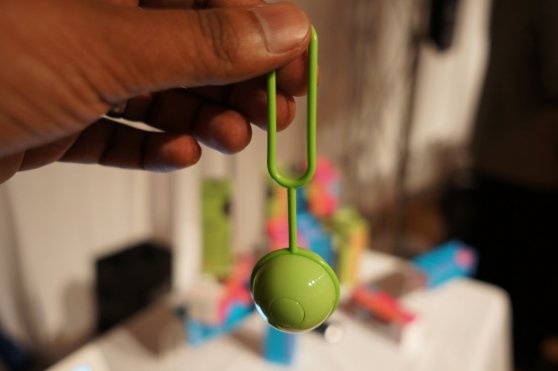 ShutterBall: A cute remote shutter for your smartphone

Remote shutters aren’t anything new, but I’ve yet to see one that looks like ShutterBall ($25). The gadget lets you take photos up to 60 feet away from your iPhone or Android phone, which makes it ideal for selfies and group shots.