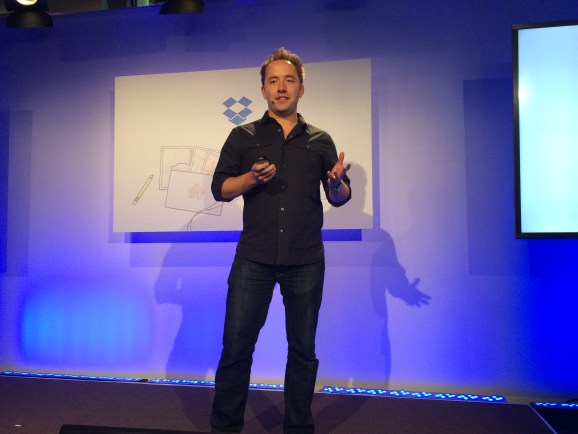 SAN FRANCISCO — People save 1 billion files to Dropbox every single day — that’s more than the number of daily tweets on Twitter.

Dropbox presented a completely rebuilt, re-imagined Dropbox for business product today, that aims to make it easier for people to switch between their work and personal accounts from one central place.

“I probably switch between home and work accounts 10 times a day,” cofounder and CEO Drew Houston said at an event in Dropbox’s San Francisco office. “We have 200 million users, and if we did it the way everyone else has done it, our users would spend 1,000 hours every day wasted on account switching. We are Dropbox, we can do this better. Nobody has built a product that both users love and IT loves.” 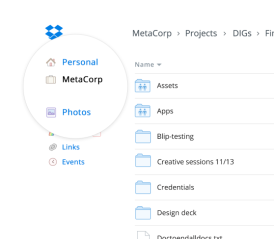 The new Dropbox for business lets users alternate between their work and personal accounts in one click. Their work folders are clearly marked as for work, and IT administrators and managers have more advanced control over permissions. If an employee tries to share a file with someone outside the organization, they will receive a notification letting them know they cannot.

From a central dashboard, managers now have access to an activity feed with information about passwords, logins, admin actions, sharing, and membership, so they can see who has accessed what. They can quickly add and remove employees as they come and go, and transfer permissions between accounts. The product satisfies compliance regulations, and files can be wiped remotely.

Professional organizations are increasingly adopting Dropbox for their business needs, and there are now 4 million businesses using the cloud storage site for work, including 97% of the Fortune 500.

“We now have over 200M users, the momentum has been wild,” Houston said. “Those millions of people go to work every day,  and they are putting their company plans and budgets and forecasts and PowerPoints into Dropbox too. There is a pattern here — people love that they can work from anywhere and have their personal stuff and work stuff together for the first time. This is such a big opportunity, we tripled our product development team.”

However the growth of Dropbox for business has created some challenges. IT teams need to keep corporate data secure and distinct, and it is not easy to balance the desire for separation between  personal and work accounts with the desire for convenience. The new Dropbox for business aims creates a kind of “separate togetherness.” If it can work for couples, why not for file-sharing?

Dropbox was founded in 2008 as a cloud storage option for consumers, but the team realized that millions of businesses were using Dropbox at work and has spent the past year expanding its focus to the enterprise. Its “Dropbox for business” product has additional security and credentialing systems and has more than 100,000 apps available on its platform for functions like customer relationship management and collaboration.

A recent survey from software development company Spiceworks (PDF) found that Dropbox was the preferred cloud-based file-sharing vendor among both companies and employees.

The new Dropbox for business will be available in beta next month and launched publicly next year. Dropbox’s mobile app will update as well.