SAN FRANCISCO — What happens when you put soldering irons, components, and simulated car dashboards in front of a bunch of software hackers?

We found out today at DevBeat, VentureBeat’s inaugural developer conference. While 500-plus developers were learning about Node.js, Angular.js, Haskell, and PHP, teams of makers were furiously working on hardware projects of their own up on the main stage at the Regency Ballroom here.

The teams had 24 hours to create something amazing that incorporated a hardware element, whether that was a simple light sensor circuit or something that extended the capabilities of a whole car.

Ford Motor Co., which partnered with VentureBeat on the makeathon, was on hand with test units (called TDKs) that simulate a Ford’s dashboard, enabling app makers to test out code that could interact with a car.

TechShop was on hand to loan the teams tools and give them LEDs, actuators, batteries, sensors, and other key components. AngelHack hosted the competition through its Hackathon.io website.

What the teams produced in 24 hours was pretty amazing. The first-place winner, Sensecloud.io, wins two tickets to a future VentureBeat event and a 12-week mentorship program with AngelHack — quite a sweet deal for a brand-new company that was just born this week.

Without further ado, here are the four winning teams and their projects.

The first-place winner in our makeathon, Sensecloud.io, built a cloud-based service for collecting, integrating, and presenting data from inexpensive sensors. The team started with $5 sensor modules that include a three-axis accelerometer and a motion detector as well as a Bluetooth Low Energy connection for uploading data. They built an online database to collect that information and a website to present it — and their plans include creating an easy-to-use API so that anyone can build apps that take advantage of sensor data. The goal is to make it into an “If This Then That for sensors.” Applications could include letting you know if there’s a free seat in a movie theater, telling you if a conference room is empty, or alerting you when the washing machine in your apartment building is free. Impressively, they built a remarkably complete demo in just 24 hours. They also scored their first backer at DevBeat: a fellow Makeathon competitor gave them $10 for one of their sensors. 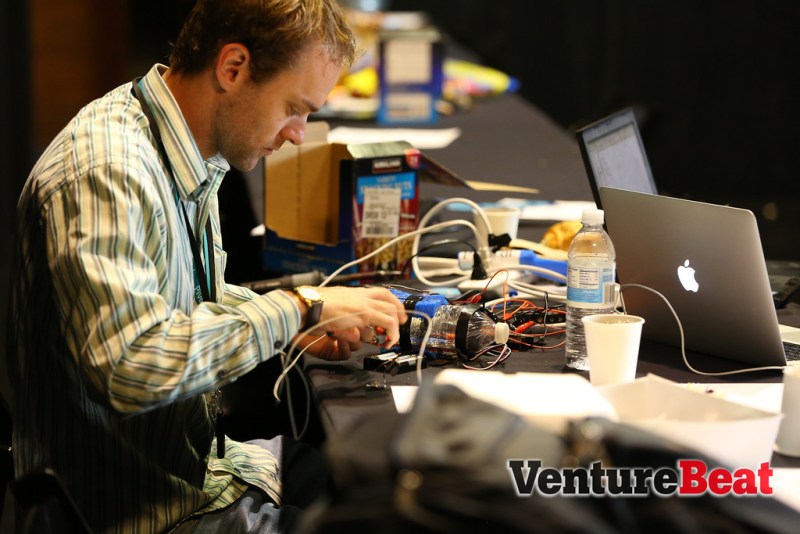 Above: Contestants had just 24 hours to hack something together.

If you’ve got a recent-model car, you can keep tabs on where it’s going by checking the GPS records. But the makers of Glassboard want to go one step further and give you the ability to keep an eye on your car’s whereabouts — and its dashboard data — in real time. That could be incredibly useful for companies that manage fleets of cars, as well as for anxious parents. Their demo showed a real-time display of the car’s speed, engine RPM, temperature, fuel capacity, and odometer reading. Glassboard won a TDK test unit from Ford (a $5,000 value) and the chance to compete for a spot in Ford’s upcoming CES booth in January.

Real-Time Taxi looks simple on the face of it: It’s a notification system that taxi companies might use to send alerts to taxi drivers about people who have requested rides. Using Ford’s AppLink technology, the app (running on a phone plugged into the dashboard of the car) sends a notification to the car’s dashboard: “Customer waiting for pickup at Van Ness and Sutter,” for example. The driver can accept the ride or reject it using steering-wheel buttons. It’s easy to imagine something like this integrated into a taxi app — or becoming a taxi app of its own. The maker of this app, Geremy Cohen, used PubNub (his employer) to manage the distribution of data from customers to taxi drivers. Like Glassboard, this app won a Ford TDK and the chance to win a spot in Ford’s CES lineup. (Ford initially planned to give away just one TDK, but they were so impressed by the two car-oriented hacks that they ponied up a second one.)

Sometimes the coolest hardware hacks are purely hardware. While the other winning competitors in our Makeathon used code to leverage their hardware, Drinks on Us went purely electronic, building a water bottle sensor that detects how full your bottle is and signals you accordingly (low beeps for a fairly full bottle, or high-pitched chirps when it’s nearly empty). That could be useful for drinking games — hey, your friend just took a swig, maybe you should too — or for encouraging people to drink more water. It uses a Sumobot board, LEDs, infrared sensors, and more. Drinks on Us won a 3-month TechShop membership.