Before we get ahead of ourselves thinking about what this means for the sell-your-fashion company’s growth, chief executive Manish Chandra explained that there’s more to come before we see an IPO out of Poshmark. 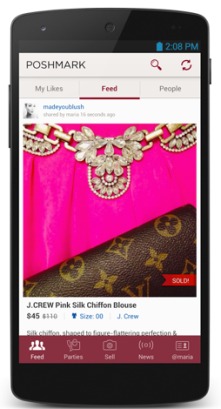 Above: Poshmark on Android

“I think there’s going to be more funding before we IPO, for sure,” Chandra said in an interview with VentureBeat. “Am I thinking of IPO? No. We’re thinking of building the business out to the next level.”

Anyone can use Poshmark to buy and sell clothing, shoes, and accessories through its app, and it has seemingly been booming in popularity, though the startup doesn’t release user numbers. But the growth must be significant enough — the company threw its first “Posh Fest” in Las Vegas for these sellers.

The app has up until this point only been available on iOS and the web. The company, which has raised $15.5 million and launched in 2011, waited a considerable amount of time before tapping into the Android userbase.

“I started to feel that this year a lot — Android pressure build up,” said Chandra. “We’re excited with this whole massive market that is opening up.”

And it’s massive market, indeed. Android currently holds around 80 percent of the global mobile market share, which could open the doors for the app’s accelerated growth that could lead to something, like, well, an IPO. Poshmark is a rarity among startups in that it relies on revenue sources other than advertising or in-app purchases — real commerce’s happening on the app. Poshmark says it is on track to have over $350 million worth of inventory run through the app this year. Of course, Chandra says there’s a bit more work to do before we see Poshmark on the trading floor.

Android opens the doors for huge international expansion, and Chandra admits is on Poshmark’s mind.

The app currently focuses on fashion listings, which are fairly easy to do from the seller’s point of view. You take a few pictures of an item, write a description, and input a price, all from within the app. Buyers can browse listings at any time or pop in to one of Poshmark’s many “Posh Parties” or in-app events where people post items based on a theme.

Chandra explained that he spotted an increasing number of Android smartphones walking around Poshmark’s in-person events. And when users invited their friends to the app via text message, 40 percent to 60 percent of those referrals landed on Android phones, which, at the time, made them useless referrals.

Before international expansion happens, however, Chandra has a couple more things on his plate. He’s exploring new shipping improvements, including a partnership with the U.S. Postal Service. There’s also Poshmark’s lacking web experience, which Chandra says he’s “not that proud of right now.” Though he sees big potential for the web property.