In the early days of the PlayStation 4’s launch window, it will be crucial to have some visually slick titles that can show off the console’s raw power. Resogun does the job quite nicely, and depending on how you get the game, there can be a ton of value in this bullet hell-style shoot-em-up.

Finland-based developer Housemarque is also pushing Resogun as the successor to its Super Stardust shooter series, so it also has some large, shiny shoes to fill. Resogun definitely wins on the “eye-popping visuals” front, but the overall experience is limited enough that hardcore leaderboard chasers may be the only ones getting the worthwhile mileage.

All those gorgeous little ‘voxels’

Over the years, most developers have improved on basic shoot-em-up concepts by packing in special effects and shiny lights. Resogun does this exact thing in every single level, and the result is a real feast for the eyes.

With every destroyed enemy and every burst of gunfire, a massive amount of particles, specks, and laser fragments always fills the screen. In fact, so much is going on that you’ll sometimes struggle to keep track of where everything is in the levels, but the collective effect is downright gorgeous on a 60-inch HDTV display.

For some reason, Housemarque calls the various bits of the levels “voxels,” and I have no idea why. But I do know that the developer is simply showing off when they’re exploding the scenery into millions of high-definition boxes, and it looks damn good every time.

Sharp, pulsing audio only makes the experience better, and Housemarque uses the PlayStation 4 hardware to full effect. Getting audio feedback and subtle sound effect cues from the controller is a small contribution, but it’s a nice perk nonetheless.

Resogun spends all of 5 seconds telling you about the story (you’re rescuing human survivors in a postapocalyptic sci-fi world), but the gameplay is deep enough that it doesn’t need a premise.

Choosing from a small handful of ships, each level is built on a single circular track that rotates as you fly the 360-degree perimeter, avoiding gunfire and looking for human survivors. The level design here is a smart take on the old-school arcade shooter Defender, especially since you can now glimpse everything that’s going on in the background.

You’ll race back and forth to pick up survivors, power-ups, and track down enemies, and the learning curve is shallow enough that you’ll adapt to new enemy types pretty quickly. The real challenge comes from balancing your safety against ferrying survivors to safe zones, which can net you extra lives, bombs, and other upgrades.

Thankfully, saving humans isn’t a requirement for success, so you can focus on getting used to enemy patterns, boosting through blockades, and timing your “overdrive” supershots at your own pace. Once I was able to put it all together, I found myself in that “zone” where I was racking up points, saving lives, and beefing up my ship while confidently gliding through waves and waves of bullets. 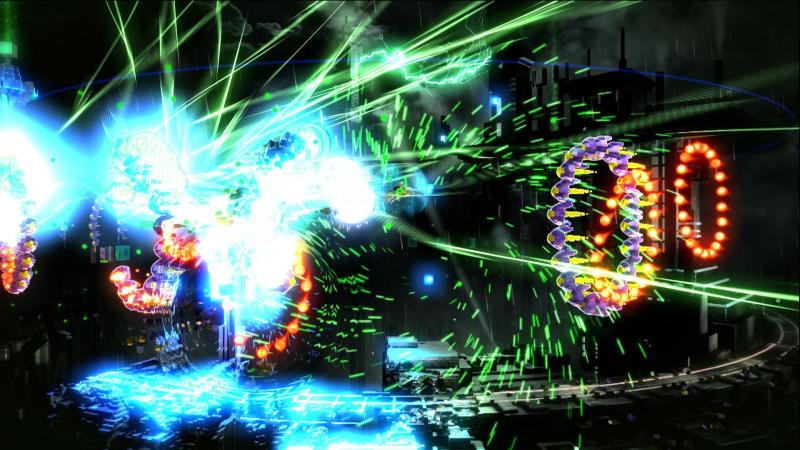 By the end of my review, I was having plenty of fun with Resogun, but the first few flights can be frustrating thanks to the lack of a tutorial level or any training wheels. The barrier isn’t that high, but the basics are complicated enough that it takes time to figure out a few critical things.

In particular, Resogun does a poor job of pointing out its own gameplay elements. It has no obvious way to determine which enemy types are the ones that release human captives, and even when you figure it out, the distinction is still hard to spot. Further complicating this, some players might get bewildered when trying to figure out their weapons and when to use them, and the audio cues aren’t obvious enough to be helpful. As a smaller nitpick, I don’t like the change to the heads-up display, which no longer distinguishes your remaining lives or screen-clearing bombs.

As mentioned before, Resogun’s value depends on how you approach it. If you’re aiming to climb leaderboards and be the world champion (or just beat your friends), hours and hours of satisfaction are likely ahead for you.

But if you’re looking forward to blitzing through tons of levels and unlocking extra ships, you won’t find much content past what’s offered upfront. That may not matter for most, since Resogun is free with a PlayStation Plus account (PlayStation 4 owners get a PS Plus trial), but I wasn’t compelled to keep playing once I hit my wall.

Resogun does everything it promises, and not a a bit more. It has gorgeous graphics and solid skill-based gameplay, with valuable online co-op support and just enough content to keep things interesting for a while.

Maybe it’s indicative of the shoot-em-up genre itself, but Resogun is ultimately a short burst in the PlayStation 4 launch lineup. Ultimately, it’s best for huge fans of Super Stardust. If you’re getting it for “free” in a PlayStation package deal, keep the download and try it out. Otherwise, you can probably skip it.

Resogun comes out for the PlayStation 4 on November 15. The publisher provided GamesBeat with a digital copy for the purpose of this review.