In order to be an actual software person, you need to see the whole world through the “lens of software.” You want to pull the Earth and all its people into the software domain. For you, anything can be solved through software. And, in your opinion, the world’s problems are increasingly fixable with software.

And you love minimalism — especially in hardware. 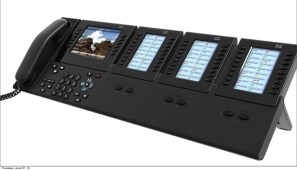 Above: Lawson says, “You might not be a software person when…”

Lawson used the example of the developers at Cisco who created the product you see to the left. They’re not software people.

To Lawson, software people look at hardware and say “we need this to be as minimal as possible.” Apple took the remote control and made it into a three-button Fun-Dip stick. Nest took the thermostat and made it a puck-sized dial, controlled almost entirely through your also nearly button-less smartphone.

Check out our favorite 10 quotes from Lawson’s talk at DevBeat 2013 on what makes a software person and see if you’re one of them:

On who a software person is:

On what a software person creates:

“A lot of people think of Fitbit as a hardware company, but in reality Fitbit is a software company because all they’ve done is build the minimally required hardware to sense a part of the world and bring that data into software. … You’re not buying the device, you’re buying the data that is the result of that device.”

“Teslas are rolling pieces of software. That’s all they are.”

“You can’t have a telephone without a microphone and a speaker, but everything else can and should be software.”

On how a software person looks at business:

“You end up with this world where companies that are shackled with infrastructure are going to lose. They aren’t agile.”

“Competition in the age of software is closer than ever before. If you have a web application, your competition is literally a back click away.”

On how software can impact the world:

“Software people are taking over, our time is now.”

“Now is the best time ever to be a software person. More and more of the world’s problems are addressable by software people.”