Apple’s much-rumored iTV (and other iGadgets) could be getting Kinect-like motion sensing tech.

Israeli financial news site Calcalist reports that Apple has scooped up PrimeSense, the Tel Aviv-based company behind the motion-tracking technology in Microsoft’s original Xbox 360 Kinect, in a deal worth roughly $345 million. Calcalist originally reported on a potential acquisition in July, but PrimeSense dismissed that report as rumor and speculation — as it’s doing today.

“We do not relate to rumors about our customers and partners,” PrimeSense’s executive vice president of sales and marketing, Yaniv Vakrat, told VentureBeat.

“PrimeSense is the leading 3D technology in the market. We are focused on building a prosperous company while bringing 3D sensing and Natural Interaction to the mass market in a variety of markets such as interactive living room and mobile devices. We do not comment on what any of our partners, customers, or potential customers are doing and we do not relate to rumors or recycled rumors.” 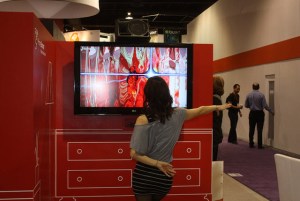 Above: A CES 2012 attendee tries out PrimeSense tech

Official confirmation of the acquisition is said to be planned for about two weeks.

While PrimeSense motion tracking tech could appear in iPhones, iPads, and MacBooks, Apple bought the company to bolster its rumored smart TV project, according to the Israeli report. Whispers of “iTV” have been around for years, and PrimeSense said it was exploring TV integration for its motion sensing tech as early as Jan. 2011. (See this video of PrimeSense demoing a gesture-controlled TV interface.)

Microsoft has moved on from PrimeSense, switching to an in-house solution for its next-generation Xbox One Kinect. But PrimeSense has continued to iterate on its technology, reducing the size of its sensor array so it can fit in smaller devices while still maintaining accurate limb tracking.

Apple is believed to be working on a 3D gesture interface. The technology giant has its own patents for motion sensing technology — like this one for laptops, tablets, and smartphones — but it may also license technology from PrimeSense or one of its competitors. It’s unsurprising that Apple would want to own that technology so competitors couldn’t get access to it in the future — and with its massive cash reserves, Apple can certainly afford it.

The PrimeSense acquisition would be Apple’s second purchase of an Israeli company. Apple scooped up flash memory firm Anobit for a reported $400 to $500 million in Jan. 2012.

PrimeSense has raised $85 million from venture capital funds like Canaan Partners Global, Gemeni Israel, and Genesis Partners, according to Calcalist. The company has around 150 employees.