This is a big week for Salesforce.

On Monday, the $33 billion cloud computing company kicks off its 11th annual Dreamforce conference, which is expected to draw more than 100,000 attendees. The crowd will be buzzing about all sorts of news at the show, but one of the biggest announcements is bound to be Salesforce1, the company’s revamped mobile platform for administrators, end users, and developers.

Salesforce1, which has been in the works for eight months, represents Salesforce’s third big push into mobile — historically a weak point for the company — with a retooled customer relationship management (CRM) solution for iOS and Android. 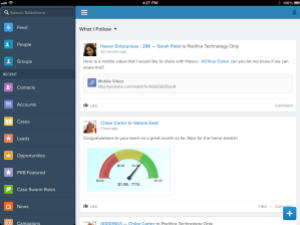 Above: Salesforce1 navigation on iPad

“It’s a new home base for Salesforce mobile,” said Al Falcione, vice president of corporate messaging at Salesforce, in a conversation with VentureBeat last week. “Anything related to customer info, processing, and data will all be integrated into Salesforce1.”

“We’ve completely reimagined the CRM experience for users out there,” added Falcione. “This effort is a culmination of everything we’ve learned over the past few years about the mobile world.”

The Salesforce1 platform extends to developers, too, who are getting a bunch of new tools for mobile apps — not just for tablets and smartphones, but also for wearables and other connected devices. Philips is using Salesforce1 to build smart MRI machines capable of relaying all sorts of data back to hospitals, Falcione told us. Caterpillar is doing the same thing for its bulldozers and heavy machinery.

While Salesforce hopes to be an integral part of the Internet of Things, more traditional mobile development is also a big focus. Salesforce1 features 10 times more APIs than past Salesforce tools, according to Falcione, which will enable developers to tap into all sorts of Salesforce data for their mobile apps.

“These new APIs and development applications are the future of where our industry is going,” said Falcione.

In total, 16 apps built with Salesforce1 are going live next week from companies like DocuSign, Box, Concur, Evernote, and LinkedIn, with over 125 more apps coming soon. They’ll all be available on the Salesforce AppExchange — rebranded as the Salesforce1 App Exchange — and will work inside the Salesforce1 mobile app.

Salesforce has conducted an “extensive” beta program for Salesforce1, but it won’t be clear how powerful (and user friendly) the platform is until it’s available to a broader community. Although Salesforce remains a leader in CRM, the company has some sizable competitors nipping at its heels, particularly in the mobile space (Microsoft Dynamics CRM and SugarCRM come to mind). It’ll take some time to see if Salesforce1 will keep them at bay.