It’s been roughly 11 years since Panzer Dragoon Orta swept into the original Xbox library and threw gamers for a loop with its exciting gameplay, engaging story, and amazing special effects.

Crimson Dragon, the franchise’s so-called spiritual successor, doesn’t have any of that.

Instead of resembling Orta or the original 1990s Panzer Dragoon titles, Crimson Dragon is a neutered, rushed shell of a game devoid of any character, identity, or personality.

That’s not to say that it doesn’t have a few redeeming qualities, but they’re barely noticeable, thanks to design elements that reek of shallow, free-to-play, microtransaction-baiting mobile development habits.

Collecting and raising your dragons

Crimson Dragon hands you a flying steed right at the start of the game, but you’re definitely not restricted to a single fire-breathing partner. As you complete missions and level up, you’ll capture various types of dragons with different stats and abilities suited to battle different enemy types.

Once you start to accrue enough valuables, you can use items to evolve your dragon, change its special attacks, or even switch its elemental nature. You’ll also be able to rent “wingmen” based on other players’ game data — giving you a critical ally on the battlefield — while also collecting rewards for your own dragon’s automated efforts online.

Most of the missions throw hundreds of little enemies at you, but the big attractions here are the gigantic, screen-filling beasts that cap off certain levels. They’re uniformly tough to take out if you’re under-prepared and lacking the proper equipment, but they present rare highlights among long bouts of tedious, slogging gameplay.

Typically, the early ones aren’t too hard to defeat with a wingman backing you up — most die with two shots of your special bomb attack — but certain bosses take entire missions to grind down. Those occasions are really when Crimson Dragon is at its peak. 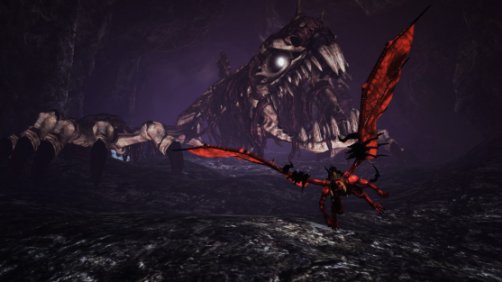 Above: Crimson Dragon will send you on several missions that rehash the same dull environments.

Completing missions in Crimson Dragon is a downright chore. Most levels are simply built from a small pool of the same objectives, resulting in some incredibly mind-numbing tedium.

Each level is divided into sections where you’ll do the following: shoot down swarms of small enemies, follow “beacons” for extra points, and tackle large bosses while aiming for a time limit. That’s the entire scope of the game, and despite the rewards you collect along the way, it gets old quickly.

Crimson Dragon is set against backdrop of a world where humanity is struggling to survive on a new planet, but that’s only used as a thin premise to justify why you’re hunting down infected jellyfish and other rogue winged beasts.

Most of the plot is only moved forward through still frames and disembodied voices barking orders at you, with most characters firing off tired one-liners about you being a rookie and the world’s only hope. It’s almost offensive how impersonal the game gets, offhandedly shipping you out on missions to grind resources for your next combat upgrade, but giving you no motivation or reason to even care.

Make no mistake, you’ll have to repeat missions over and over in order to level up and access the most powerful dragons you can. It’s the only way to break through the occasional difficulty wall thrown in your way, and the rewards are doled out in bread crumbs small enough to keep you from making any decent progress.

Of course, you can speed things up a little with in-app purchases, and the game’s menus are pretty sneaky about not letting you know when you’re paying real-world money for digital goods. It’s a disgusting habit that’s usually forgiven in free mobile games, but there’s really no excuse for a $20 “next-generation” console title.

Crimson Dragon is an Xbox One launch title that looks like an Xbox 360 game. That’s actually not surprising, since it was originally slated to be released on the Xbox 360 in June 2012.

Whatever the developers were doing since then, it didn’t involve a lot of polish. Crimson Dragon’s environments are either dark, cramped, and visually muddled, or huge, bright, and filled with nothing but bare, static backgrounds. There’s just not a lot of life in much of the planet, even with dozens of enemies and allies constantly flying around the screen. Confusing clusters of explosions and your own rigid flight patterns don’t help much either, so you’ll be too busy to appreciate what little effort went into the overall design.

If Crimson Dragon had been released for iOS or Android devices at a cheaper price, it would be one of the year’s more interesting releases. Instead, the final product is a rushed, homogenized mess of a game that fails to live up to its loosely associated pedigree.

There’s a couple good ideas in here, but they’ve been haphazardly thrown into an unimpressive package that does nothing to stand out against far better Xbox One launch titles. As it stands, the Panzer Dragoon series is still as dead as ever.

Crimson Dragon comes out for the Xbox One on November 22. The publisher provided GamesBeat with a digital copy for the purpose of this review.