UPDATE (10 p.m. Pacific time): We were able to get a late co-op session and have updated the review text with our thoughts. The co-op’s smooth connectivity and improvements to the side objectives raise our score to 85/100.

Editor’s note: We were unable to play any of Dead Rising 3’s co-op campaign prior to the review embargo due to technical difficulties. We are attempting to resolve the issue with Microsoft, but this review and its score does not reflect co-op.

Los Perdidos is bigger than anything Dead Rising has seen before.

The city in this Xbox One launch game from Microsoft Games Studio and Capcom Vancouver is gigantic, bigger than every area in the first two games put together — and it’s teeming with zombies. It’s full of side missions and weapon-crafting, all of which makes Dead Rising 3 an ambitious evolution of the cult-favorite hack-and-slash action franchise.

While the difficulty curve is shot and a city this big should never lack a fast travel system, Dead Rising 3 stands out among Xbox One launch titles as a solid adventure with the potential for hours of gameplay.

The move to a more open world brings with it a surprisingly cutscene-heavy story that’s on a much grander scale than earlier Dead Rising games. Nick Ramos, mechanic extraordinaire, is part of a small group of survivors in the fictional Californian city of Los Perdidos. The urban sprawl is three days into a zombie outbreak, with hastily mounted quarantine zones falling apart at the seams. It’s not too long before the military announces a scorched earth fail-safe plan of bombing Los Perdidos, leaving a ticking clock over Nick and the survivors as they search for a way out of the city.

The story of Dead Rising 3, outside of its achingly routine premise and progression of events, is at times bizarre and idiotic. But it’s almost always amusing. Nick himself is more a plot device than interesting character, but the multiple groups of other survivors he encounters are a more amiable lot. Boss characters in particular are a distinctive and ridiculous bunch, each equipped with their own batch of histrionics. 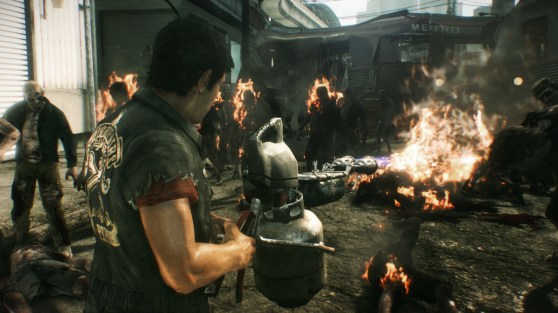 Weapon crafting is as addictive as ever

To simply state that Dead Rising 3’s protagonist, Nick, is a mechanic sells its central draw seriously short. Like previous Dead Rising protagonists Frank West and Chuck Greene before him, Nick can MacGuyver his way to a wide variety of instruments of death without so much as a roll of electrical tape in sight. Finding blueprints opens the option to combine two weapons or components from the radial menu into more devastating implements of death.

Unlike Frank or Chuck, Nick doesn’t even need to find a work bench to initiate the crafting process. Players can make new weapons or items seamlessly, with only a brief progress bar between you and a new toy. One-hundred and one blueprints are scattered across Los Perdidos for players to find, and hunting down each new toy and trying it out on the nearest horde is the true joy of Dead Rising 3.

Not all of Ramos’s monstrosities are equal when it comes to combat effectiveness, but the duds make up for their failings by being charmingly stupid. The slapper, a pair of boxing gloves attached to a broom, largely comes to mind. What makes the process of weapon combination so perpetually engrossing is the prevalence of materials in every environment. Previous Dead Rising games were stuffed with interactive objects, but in Dead Rising 3 each room, storefront, or curb has handfuls of litter that you can use. Each new type of material or object Nick picks up is also automatically stored in a weapon locker located in the many safe houses for later experimentation.

The amount of diversions in Dead Rising 3 borders on excessive. Side objectives are largely divided between rescuing survivors from  surrounding zombies, fetching objects for potential companions, survival challenges that force a set of combat conditions under a time limit, battles with deranged “Psycho” minibosses, and destroying speakers that attract troublesome hordes of the undead. Add in the collection of blueprints and golden statues of Dead Rising star Frank West and the single-player campaign length can easily double when roaming around the map.

And while the plethora of fetch quests may grate on the nerves after a while, the rewards for persevering are usually worth the grind. Every task Nick completes earns Prestige Points (PP) that factor into leveling up. Reaching a new level awards points to spend on a variety of upgrades like health and melee damage, along with streamlined crafting options. Putting points into certain skills will also unlock extra combat moves or unique blueprints. The levels rise extremely fast in the early chapters of the game, long enough to hook players to the process before it all evens out towards the halfway point. A series of secondary PP trials invite players along a gauntlet of extra challenges, although most are busy work players will complete without planning to.