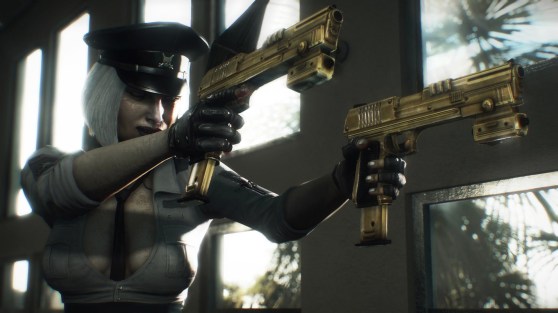 Above: Capcom Vancouver saved all the weird and bizarre for Dead Rising 3’s boss encounters.

Boss battles appeared to have received much of the attention when it comes to layout and narrative design. Boss characters take just as long to die as the zombie grunts, but you fight them on larger, open fields than previous in Dead Rising installments. Even with the improvements to gun handling, ranged weapons aren’t ideal for most boss battles, most having movement speeds not working well with the targeting system. Finding and adapting to attack and movement patterns brings back that classic feeling of empowered satisfaction of games from the past, particularly an encounter with an organ-harvesting doctor that drugs Nick and sends the camera swirling. Even the “psycho” minibosses get some time on the outlandish stage, with one fight in a buffet demanding the death of an obese woman on a motor scooter, complete with vomit attacks.

A foundation of solid controls

With such a massive map, it’s good Los Perdidos is littered with idle vehicles that just so happen to have the keys still in the ignition. Nick can cruise along the highways in a variety of standard vehicles and more dangerous automobiles of his own making. Operating the cars and vans work smoothly using the shoulder buttons, which is good because you’ll need to cross the vast distances between mission objectives frequently.

But eventually, it will all come down to Nick against a whole mess of zombies.The basic combo system can handle most waves of the undead, with your attack options increasing with upgrades and player level. Ground attacks are definitely lacking when it comes to most shorter weapons, leaving Nick open grapples from legless zombies crawling across the ground more often than is appreciated. Using ranged weapons is almost too effective, making most gunplay a simple point-and-click adventure in zombie blood explosions. When Nick starts getting the blueprints for more powerful firearms, it’s just plain goofy.

Building up a chain of kills increases the PP yield for each death and opens up the occasional opportunity for an aggressive superattack that varies across different types of weapons. These gruesome melee moves are gleefully brutal, but their usefulness as a one-hit kill out lasts the schadenfreude of seeing a zombie’s right side skinned down to the tendons by a saw blade. New players will have no problem building their first 50-kill streaks. 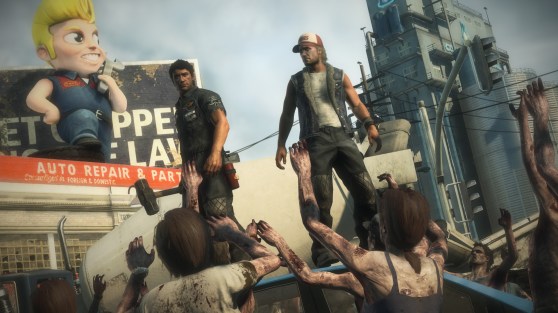 Above: The amount of zombies onscreen at one time can be truly intimidating.

A lot of zombies in a pretty audio-visual package

In the same vein as the original Dead Rising for the Xbox 360, Dead Rising 3 is looking to show off new processing power through numbers. The amount of zombies capable of being displayed on-screen is an impressive feat that manages to sell the horror that comes with the thought of a throng of undead. The rate at which individual zombies lunge at Nick as he moves through the crowd feels unique to each instance, and when united the undead merge into a wave of rotten flesh that can slam or mill around a car and seriously impact its speed.

Dead Rising 3 flexes some serious presentation muscle across the board, with cutscenes in particular bearing that next-gen gloss and shine. Capcom Vancouver’s facial animation and performance capture rivals Naughty Dog’s work on Uncharted, with even sharper textures. Fire and lighting effects glow beautifully; blood spatters are grimy and thick. On the audio front, zombies snarl and rasp with the appropriate balance of human and animalistic qualities. Voice performances are uniformly rich with personality, forgiving a few shaky performances from bit characters. The soundtrack is sparse, punctuating moody moments with a cheesy, B-movie electronic undertone.

If the chaos of being one guy inciting an undead massacre is not enough, Dead Rising 3’s co-op campaign provides for drop-in/drop-out play between two players.

Connecting into an online multiplayer session is relatively seamless. The second player takes on the role of Dick, a mirrored version of Nick that shares the level and upgraded skills of the single-player character who spawns within a hundred yards of the campaign player. Matches can be set up via the Party option on the Xbox One Dashboard or in-game using a random search of playstyle terms. The lack of an in-game option to connect to players in your friends list is regrettable, and you don’t get any information on the players you come in contact with before or after a session.

Los Perdidos is quite the playground for group play regardless of whom you wind up with. Coordinated players will turn the already easy zombie-slaying into a breeze, but co-op does relieve a lot of the monotony of the side objectives. Collectibles are shared between players, so any blueprint or Frank West statue picked up by either gives out the same PP to Nick and Dick. It’s the same for combat challenges, where kills racked up by both players are combined into one total that counts toward the goal. Traveling is still a slow process, but should either player stray too far away from his partner, a quick press of the Options button teleports him directly back into the fray.

Nick’s skill with a blowtorch does not stop at weapons, as the crafting system provides for almost a dozen sturdier vehicles with secondary weapon mounts. The effort to make these stronger vehicles is frequently unnecessary, given the amount of standard vehicles that thoroughly fill the map. Modified cars are stored in various garages throughout the map similar to the weapons locker, but traveling back and forth to them for a moderately stronger SUV rarely feels necessary. And without the ability to hold on to any vehicle component, Nick is left waiting until he stumbles across the exact type of motorcycle parked near enough to the exact type of car to make crafting worth the effort. 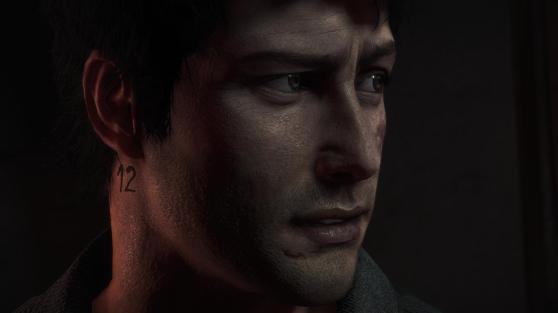 Above: Nick Romas is a bland protagonist in an often peculiar world.

The journey may be consistently amusing, but the destination feels stale. Boss encounters may drip with an infectious affection for the absurd, but the narrative treads through the basics of zombie storytelling. Gangs take the police absence as license to go feral and territorial, and groups of ostracized skeptics are vindicated when the government reveals clandestine motives surrounding the infection. We’ve played all this before years ago, and players can predict most of the plot shifts an hour ahead of when they happen. Later chapters play out some interesting turns in the plot (and cameos), but not before a sense of déjà vu has long settled it.

It isn’t bad, by any stretch. The consistently impressive animations and performance capture on display let the cast run through a decent script with more emotional depth than the plot may deserve. But in a time of such rampant exploration of the zombie outbreak as a concept, Dead Rising 3 has chosen to polish what’s been done before, rather than take it somewhere entirely new. Appreciate it as a collection of vignettes between boss encounters, but don’t look for anything deeper.