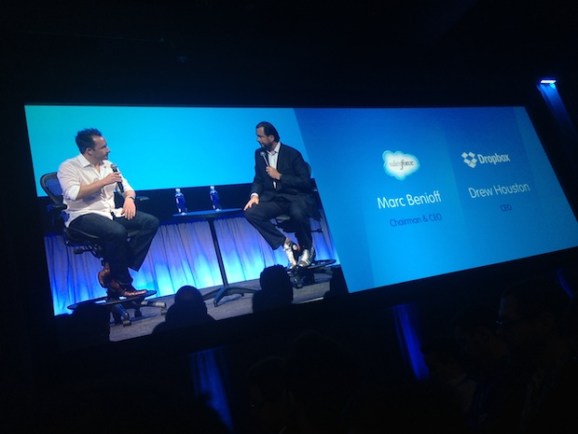 During their keynote at Dreamforce, it became apparent that the CEOs of two very successful business software companies share a mutual love of early ’90s rock — and each other.

“You are everything Dreamforce stands for,” Benioff told the young Houston minutes ago. The effusive comment was the conclusion to an hour-long session, where Benioff and Houston took turns interviewing each other. As you might expect, Benioff did most of the talking.

The contrast between the two personalties was noticeable, and entertaining to watch. Houston, who just turned 30, comes off as the quintessential Silicon Valley entrepreneur. He’s an unassuming programmer, who avoids the media, and is often spotted in his trademark Pearl Jam T-shirt. Meanwhile, Benioff’s commanding nature, business skills, and sheer physical presence is the stuff of legend. Benioff also proved to be quite the interviewer, pushing Houston to answer tough questions.

Prompted by Benioff, Houston described how inspiration for Dropbox struck when he was on a bus from New York to Boston. The MIT grad realized he had left his USB thumb drive at home. He proceeded to pop open his laptop and write a few lines of code.

That string of code would consume Houston for years: He was determined to find a way around that pesky USB drive. But file-sharing is a notoriously tricky technology problem to solve, and most investors didn’t think it was worth much attention. Even Houston admits that it’s not that painful to email a file or document to yourself — it’s a good way to save stuff.

However, Houston was able to convince about a dozen talented programmers from MIT to help him build Dropbox. The bet has firmly paid off — the cloud-based file-sharing startup is expected to file for a strong initial public offering, and is currently valued at an estimated $8 billion.

Benioff’s next line of question proved to be far more revealing. He encouraged Houston to describe a meeting with late Apple chief executive Steve Jobs, who tried to buy Dropbox in its early years.

Houston recalls pulling up to 1 Infinite Loop in Cupertino in his Zipcar. He informed Jobs, his idol, that he did not intend to sell the company. Jobs seemed nonplussed, and responded that he intended to “kill Dropbox” with iCloud, and detailed his vision for the cloud. Fortunately for Houston, Jobs turned about to be wrong about that.

These days, Houston spends more time recruiting than coding. Houston and other Dropbox executives will sit in a room, and list the top five technologists in the world for any new position.

Houston is in full on growth mode, but Benioff seems most passionate about Salesforce’s philanthropic efforts. He spoke in-depth about how employees are encouraged to volunteer for several hours a week. Salesforce takes corporate social responsibility very seriously.

“Better people will come to you because they know they are working in an environment where it’s not just about selling software,” he told Houston.

Benioff also reflected on how a chief executive can stay relevant in the software world, which moves extremely quickly. he referenced a recent Wall Street Journal story, which describes his final months at Microsoft before retirement. Ballmer reportedly realized that the company desperately needed some fresh blood. “My biggest surprise is this constant unfolding,” said Benioff.

After watching the pair converse on stage, I got the feeling that Benioff would excel at anything he puts his mind to — whether it’s a cloud computing company or a lemonade stand. He is one of those people who seems destined to do something great, and make billions of dollars in the process. Houston seems like a highly intelligent, lucky sort; a programmer who couldn’t let a tricky problem lie.

“Five years ago, I wouldn’t have sitting at a place like this,” Houston told Benioff. “I would have been fixing bugs in my living room.”