“We want to help auto marketers use the power and reach of Facebook to build their brands and drive sales,” Facebook VP David Lawenda said in a statement. “Michelle’s experience and relationships will be a remarkable addition to help serve our customers.” 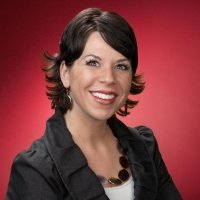 Facebook and Detroit have had a somewhat rocky relationship.

Last year General Motors famously pulled its ads from Facebook just before the social network’s IPO, saying social ads didn’t work. The company soon reconsidered and retained its Facebook presence, and eventually it began advertising again on Facebook. But it’s perhaps to avoid situations like this in the future, and to strengthen ties with GM, Ford, Chrysler, and other car makers, that Facebook has hired Morris, who will be based in Detroit.

Morris led Google’s North American car advertising team for seven years, before which she worked at an ad agency running Chrysler’s account. She’s been honored as a top 40 under 40 in the Detroit area and went to school at Michigan State, so she has deep roots in the region.

Facebook is being even more effusive than usual in trumpeting new hires — trying, I suppose, to put Detroit manufacturers on alert that the social network means business and wants to be a major partner — and a beneficiary of their ad budgets, of course.

“With Facebook’s offerings, automotive marketers can build and strengthen brand opinion, consideration, and loyalty while maximizing efficiencies at every level of the purchase funnel,” Morris gushed in a statement. “There has never been a more exciting time to work in the auto industry, and Facebook’s unique capabilities will deliver results across the entire vehicle shopping and ownership experience.”

That’s all very fluffy, of course, but there’s some truth to the statement that Facebook advertising is coming into its own.

Facebook ads generate 10 times the shares, 20 times the traffic, and 30 times the customers that Twitter does, one marketing company says. Facebook clickthroughs are up massively in Q3 2013 — 375 percent, according to a 200-billion-ad study — and return on investment is up too. Frankly, ever since Facebook put ads in the once-sancrosact news feed, engagement has skyrocketed and costs have decreased.

Which means Morris has some good ammunition in her toolbox as she approaches Detroit for its ad dollars. It also means Facebook is starting to come into its own in the war with Google for domination of online ad revenues, even though Google is still winning that battle by a large margin.