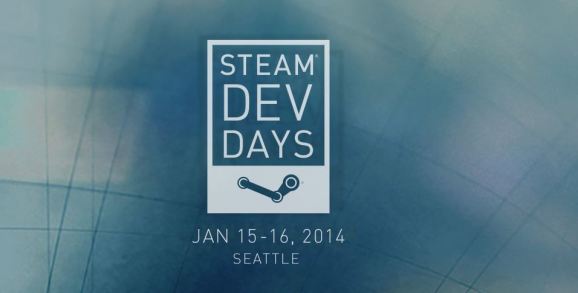 Steam Dev Days conference will enable studios to talk with Valve about working with SteamOS and Steam Machines.

Valve Software is holding a conference in January called Steam Dev Days to help other companies come to terms with Valve’s plans for the future of gaming. As expected, the software giant was able to convince some of the industry’s coolest kids to attend the party.

The event, called Steam Dev Days, is happening in Seattle on Jan. 15 and Jan. 16, and Valve confirmed to GamesBeat that the conference will feature talks from AMD, Intel, Nvidia, Oculus, and Unity.

These are five of the biggest names in PC gaming. They represent the corporations who power the hardware (AMD, Intel, Nvidia) and the companies looking to disrupt the industry (Oculus, Unity).

Now that we have an idea of who is speaking at the event, we asked Valve marketing and business development manager DJ Powers to explain what his company hopes to get out of Steam Dev Days.

“Knowledge is the one-word answer,” he told GamesBeat over e-mail. “We obviously have many presentations planned to inform attendees of our recent and coming additions to Steam, but perhaps more important, we believe, is providing a forum for developers and publishers to share the experiences they’ve had working with Steam.”

Steam Dev Days is an “off-the-record” event. That means no press, but it also means Valve won’t have archives of a lot of the smaller chats.

“One of the reasons we are encouraging everyone who can to attend is that we expect some of the most useful exchanges will be those happening developer to developer, publisher to publisher in the less formal, more spontaneous portions of the event,” said Powers.

Valve does plan to record the larger presentations and make them available online after Steam Dev Days ends.

Despite the closed-off nature, Valve doesn’t plan to use this event to make behind-closed-door deals to get exclusive games on its SteamOS platform.

“Steam has never been about exclusives,” said Powers. “It’s been about providing a platform that puts developers and publishers in the best possible place to make their customers happy. Ten years ago, the first step was providing a path for automatic updates. Today, it’s allowing things like Family Sharing, Trading, and soon the ability to deliver Steam powered experiences into the living room via the Steam Machines.”

Valve’s SteamOS and Steam Machines are pretty big changes to how the industry works. SteamOS is a Linux-based operating system that Valve wants to use instead of Windows. With such a big shift, we asked Valve if it expects traditional publishers to send representatives to the event to assess the potential of this new platform.

“We’re seeing registrations from a variety of companies, big and small,” said Powers. “With the talks from the third-party companies such as AMD, Intel, and Nvidia combined with the Valve presentations on the Steam Controller, Machines, and OS, we believe this will be a very high bandwidth couple days for all studios and publishers.”

While this is the first Steam Dev Days. It’s likely we’ll see another one. Valve says that if it is successful, it will build upon it for future events. It really comes down to attendee feedback.

“If developers find it useful, we will certainly do it again,” said Powers.

Finally, Valve explained what developers attending Steam Dev Days can expect. Powers noted that devs are typically smart people, so they should prepare for a deluge of info.

“We’re planning to provide a lot of information, and to be asked a lot of questions – and that’s exactly why we’re doing this,” said Powers. “So, we’re asking everyone to bring all their questions. And come rested because it should be a busy couple days.”